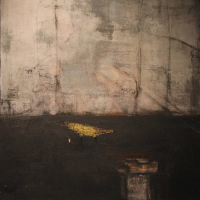 Intercities is the debut album from the trio of pianist Jetse de Jong, bassist Robert Rebane and drummer Roope Kantonen. The multi-national group hails from The Netherlands, Estonia, and Finland, respectively. All in their early twenties, the musicians met while attending the Conservatory of Amsterdam. De Jong, who studied both classical piano and jazz, was inspired to learn jazz by a recording of Fats Domino at an early age. He has toured and performed on radio and television throughout Europe and New Zealand.

The seven pieces on Intercities were composed by de Jong and each shows remarkable maturity for a young artist. His tasteful melodies are often infused with enough buoyancy and fluidity to keep the restrained pieces engaging. From the opening title track, the trio exhibits confidence and imagination that belies their newness. It is not hard to hear a Brad Mehldau-like ambiance in "Church" or a touch of Paul Bley's off-center romanticism on "Maelstrom." De Jong is inclined towards shared development, as heard in the contributions of Rebane on the melancholy "Birth" and Kantonen on his fittingly named solo piece "Drums."

De Jong acknowledges the inspiration of Northern European artists, in particular, those on the ECM label, and has cited the personal impact of Chopin, The Beatles and Tord Gustavsen. Despite, or because of, the diversity of those inspirations, de Jong has already developed a style which can stand apart from influences. Intercities is an impressive and promising debut from a talented group.