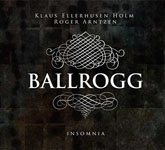 Contrasting his role in the remarkable Norwegian trio In the Country—responsible for the critically acclaimed debut This Was the Pace of My Heartbeat (Rune Grammofon, 2005) and even more ambitious Whiteout (Rune Grammofon, 2009)—bassist Roger Arntzen formed Ballrogg in 2006, with saxophonist Klaus Ellerhusen Holm; a more intimate duo that found its own dark nexus of form and freedom. Ballrogg (Bolage, 2008) was a well-received look at the repertoires of Ornette Coleman, Eric Dolphy and Jimmy Giuffre; chamber jazz with an edge. That disc also included two tracks by Holm and one by Arntzen, but for Insomnia, the emphasis shifts almost entirely to original composition, with the saxophonist contributing six of its eight tunes.

The shift to original material means more than just a walk away from familiar jazz fare like Dolphy's "Out to Lunch" and Coleman's "Sex Spy," where the duo's distinctly unorthodox approach to sound and interaction rendered them barely recognizable; Insomnia, instead, possesses more in common with contemporary classicism and oblique folklorism. The title track features an expanded lineup—including laptop artist Lars Myrvoll, and violinists Kari Rønnekleiv and Ole-Henrik Moe, the latter heard on Ciaccona / 3 Persephone Perceptions (Rune Grammofon, 2008)—combining with Arntzen's bowed harmonics and Holm's expanded clarinet technique to create a collective improvisation that owes more to microtonal composer György Ligeti and improviser Joe Maneri than jazz hegemony. The piece may be relatively short—at just under six minutes, nearly the longest of the set—but demonstrates a surprising sense of development, as time is twisted and pulled to make it feel longer than it is, but in a good way. As dramatic as these five improvisers become—and the music possesses great but understated power, as the subtlest inflection creates surprising dynamic towards the middle of the piece—it's clearly about a collective push-and-pull, where the subtlest movement from one results, at times, in a near paradigm shift from the others.

But the majority of Insomnia remains a duo affair, with the exception of Holm's "Woody Creek," which, again featuring the violinists, sounds how Philip Glass might, were he to work more in smaller contexts as opposed to grander scales. Pulses, repeating motifs and a surprisingly cogent form emerge, even as Holm proves his saxophone mettle through some unusual tonguing as he leads from a brief a capella to full accompaniment. Acutely controlled embouchure and multiphonics are also part of his sonic arsenal, yet their effect is often extremely subtle, going by nearly unnoticed during his brief solo segment before the reiteration of composition's structure. The elegiac "Sleepwalker," also featuring guitarist Myrvoll, provides a rare, grounded moment where defined changes and folksy strumming approach---but never quite make—some kind of normal.

What defines Ballrogg is control: control over tone; control over texture; control over dynamics. But even more definitive of this angular, obsidian duo is its ability to blur the line between what is written and what is not. Further distancing itself from the jazz canon on Insomnia, Ballrogg asserts itself as an improvising duo with a keen ear for spare, cinematic landscapes.