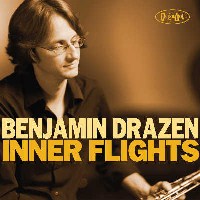 Benjamin Drazen has been on the New York scene for over 15 years, working with established players including Lew Soloff, George Garzone and Rashied Ali. The saxophonist cannot be accused of being in a hurry to get his name on a CD cover: a 15-year wait to release a debut is a lifetime in today's scene, where graduation can, all-too-often, take place after a young player's CD launch party. Inner Flights has been, however, worth the wait. Drazen and his quartet are tight, stylish, swinging players with real power and drive.

This is an album of hard bop, post bop, cool and more. Drazen's originals are combined with Ira Gershwin's relatively unknown "This Is New," driven by some terrific rhythm playing from drummer Eric McPherson and bassist Carlo De Rosa, as is Jimmy Van Heusen's very well-known "Polka Dots and Moonbeams," in a set that has depth as well as immediacy.

Drazen does ballads beautifully, as evidenced by a seductive late-night "Polka Dots and Moonbeams" and the slightly mystical "Prayer for Brothers Gone." But he also excels at the up-tempo, hard-swinging, numbers like opener, "Mr Twilight," or the title track, which starts up with some chunky piano from Jon Davis, before Drazen enters on alto. Fairly cool and measured at first, the tune builds its energy as Drazen switches to soprano and his playing becomes more intense and frenetic.

In between the ballads and the stormers comes "Monkish." The tune begins with Davis' piano which is, as expected, Thelonious Monk-ish. It's also a little bit Fats Waller-ish, adding a little touch of humor to the piece before the rest of the players enter and the tune shifts into a more straight-ahead mode, centered on Drazen's bop-ish alto.

The versatility that Drazen demonstrates on Inner Flights makes him a hard man to categorize. Best not to try. This is a stylish recording from a fine quartet, and Drazen is a hugely enjoyable player with energy and swing in abundance.