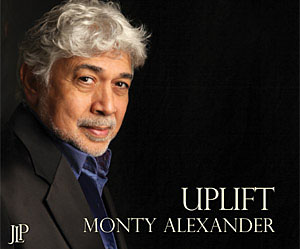 Virtually everyone who plays with pianist Monty Alexander loves the challenge of keeping up with his mischievous music-making and sudden changes in direction. Then there are those quotes—splashes of everything from bugle calls and nursery rhymes to Duke Ellington and "Meet the Flintstones"—that challenge the listeners' repertoire, as well as adding delight and surprise to each track. Who else, for instance, would begin "Sweet Georgia Brown" with a tongue-in-cheek reference to the opera "Carmen"—and make it work?

Uplift is a collection of 10 tunes, three of them Alexander's own, that producer John Lee calls "a masterpiece." That's a tough call to make, given Alexander's 62 fine recordings as leader over his five-decade career; in fact, Montreux Alexander (MPS, 1976) is such a desert island disc for many jazz lovers that it was reissued in a 30th anniversary edition. Certainly there are few living pianists who can match his imaginative and joyous approach, and his harmonic risk-taking; unlike many players who shift things around just for the sake of making a change, Alexander's innovations are always respectful of the melody. Not many are able to bring such new life to well-worn standards; in his blues-infused, infectious swing, he recalls the late master Gene Harris.

Here, Alexander is backed by his superb long-term bassist, J.J. Shakur, and drummer Herlin Riley, who has recorded numerous CDs with Wynton Marsalis, among others. From the bright, finger-popping opening "Come Fly with Me" (Alexander's salute to Frank Sinatra, an early fan and sponsor), they provide supple support for every detour, helping the whole trio rock like mad. Riley's killer solo on "Sweet Georgia Brown" is one of the things that make it the standout track—it's nothing less than a jazz juggernaut. Or, maybe, the highlight is "Body and Soul," which Alexander hitches to a bright waltz tempo and takes to a whole new territory. Others will pick the driving "One Mint Julep," the soulful "Django," or the lush Jamaican landscape of the last three tracks.

In any case, this is an exceptional collection, which also crackles with that special, open energy only a live performance can deliver. Uplift is an apt title, since that's precisely what this music does.