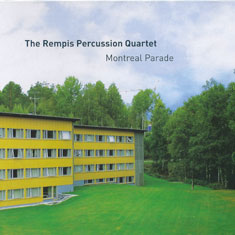 Since joining the Vandermark 5 in 1999, saxophonist Dave Rempis has maintained a high profile in the fertile Chicago scene. In addition to his role as a presenter and organizer of numerous music festivals, he can be heard as leader, co-leader and collaborator in more than a half dozen different projects in the Windy City, with The Rempis Percussion Quartet being one of his most consistently engaging and adventurous.

The ensemble's personnel have remained unchanged since its inception in 2004. Dedicated to unstructured improvisation, Rempis replaced longstanding bassist Anton Hatwich in the spring of 2009 with Norwegian-born Ingebrigt Håker Flaten in an effort to subtly alter the line-up's sound. Montreal Parade, their fifth album, is notable in that not only is it Flaten's recorded debut with the quartet, which features the unique dual drummer foundation of Tim Daisy and Frank Rosaly, but it is also a rare studio recording. Capturing their visceral live intensity in a sonically pure studio environment, this is one of the band's most expansive offerings, whose previous efforts have been documented primarily in concert. Broken into two long-form pieces totaling just over an hour, the set encapsulates all of The Rempis Percussion Quartet's standard motifs, ranging from coiled catharsis to pointillist introspection.

Propulsive yet abstract interpretations of West African, Latin and funk rhythms have long been one of the group's key strengths. "This Is Not A Tango," the infectiously hypnotic opener, spotlights Daisy and Rosaly's churning, free-associative polyrhythms underscored by Flaten's asymmetrical phrasing. Careening fervently on tenor at the onset of the session, Rempis unveils a bristling array of circuitous cadences throughout the date, whether on alto, tenor or baritone, pirouetting from intervallic bop workouts to angular free meditations.

At over 42 minutes, "If You Were A Waffle And I Were A Bee" is more than twice the duration of the preceding track. Book-ended by rousing episodes that showcase the unit's driving swing and impetuous brio, their zealous interplay eventually deconstructs into diaphanous discourse a quarter of the way into the piece. Shifting from fortissimo expressionism to pianissimo impressionism and back again, the tenor of the excursion vacillates dramatically, as unsettled quietude becomes the norm. Such extreme dynamics have long been a staple of spontaneous free improvisation, and though engaging in person, when devoid of a visual reference extended aleatoric musings like these can easily fade from attention. To their credit, Rempis and company avoid such pitfalls; Rempis' bluesy multiphonic baritone ruminations, Flaten's coarse arco harmonics and the drummers' scintillating accents maintain sonic interest even at the threshold of audibility.

Straddling the line between unfettered freedom and the traditional conventions of implied structure, The Rempis Percussion Quartet covers a wide range on Montreal Parade, demonstrating the continuing validity of their freewheeling approach with compelling fervor.