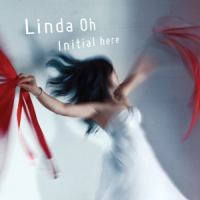 President Theodore Roosevelt's famous quote, "Walk softly and carry a big stick," epitomizes Linda Oh, the soft-spoken bassist/composer who draws total respect with her intrepid musicianship. With her highly acclaimed self-released debut, Entry (2010), and increased visibility through recording dates and gigs like Dave Douglas' "Tea for 3" Tour, Oh is emerging as one of jazz's bright performers.

Oh's sophomore release and first for Greenleaf, Initial Here, reveals even more of her savvy. Expanding from the debut's trio to a more fleshed-out quartet with virtuoso pianist Fabian Almazan, talented drummer Rudy Royston, and another young wunderkind, saxophonist Dayna Stephens, this set, which includes fresh material and a couple of standards, is a view into Oh's cultural and musical identity, drawing inspiration from many influences.

Oh's robust sound, containing bite and punch, is immediately noticeable throughout, including "Ultimate Persona," which is driven by Alamazan's eloquent pianistic language, Royston's snappy percussion, and Stephens' lyrical tenor. With its relentless swing, the command of Oh's double bass is unyielding on "Something's Coming/Les Cinq Doigts," a unique suturing of two disparate works by composers Leonard Bernstein and Igor Stravinsky.

The bassist's own compositions leave lasting impressions. Included here are the affecting "Mr. M," where her solo punctuates with strength and empathy as Stephens' horn purrs catlike, and the haunting "Thicker Than Water," where bowed bass and bassoon accompany emotive lyrics in Mandarin and English from singer Jen Shyu.

Oh's mad skills on electric bass are also unveiled with this set. On "Little House" and "Deeper Than Happy," her fingers moving with power and grace as Royston provides energetic beats and Almazan shows off his lithesome skills on Fender Rhodes. But it's difficult to beat the beauty of Duke Ellington's "Come Sunday," where melody and composition move in perfect acoustic harmony. And as icing on the cake, the set concludes with "Deeper Than Sad," the reverse sentiment of the song's aforementioned, upbeat counterpart. As on the previous tracks, this one is marked with spirit, atmosphere, and the creative depth of a rising artist.