By JOHN KELMAN
November 1, 2012
Sign in to view read count 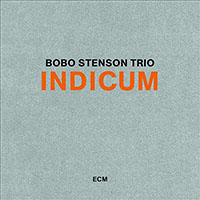 With Cantando (ECM, 2008), Swedish pianist Bobo Stenson finally documented the significant renewal of his quarter-century trio with bassist Anders Jormin. The pair had been playing with Jon Fält since the departure of drummer Jon Christensen in the early 2000s. But if Fält was already touring with Stenson when Goodbye (ECM, 2005) was released, its curious—and less than completely successful—decision to record with the late Paul Motian meant that only those fortunate enough to have heard the trio live knew just how much Fält was altering its complexion while, at the same time, embracing its core constituents.

If Cantando followed the trio's typical modus operandi—covers reflecting the trio's fondness for Latin songsmiths like Silvio Rodriguez, classical composers like Alban Berg and Petr Eben and somewhat obscure choices from jazz innovators like Ornette Coleman and Don Cherry, plus a handful of original material and spontaneous composition—then Indicum similarly follows suit, speaking with an even more profound shared understanding.

Bill Evans, alongside Sweden's Jan Johansson, has long been a touchstone for Stenson's own pianistic impressionism, but he's never before—at least, not in his ECM discography—recorded a song written by or associated with the late piano legend. Stenson opens Indicum with a solo reading of Evans' "Your Story"—a late-period composition documented only on posthumous recordings like Turn Out the Stars (Nonesuch 1996), recorded just months before his passing in 1980. If it's impossible not to feel the connection, it's equally clear in Stenson's clarity of thought, dynamic dramaturgy, and even greater use of space and nuance of touch—here, and throughout—that it's absolutely more about subsummation than imitation.

A temporally pliant look at composer George Russell's "Event VI" comes from Evans' co-billed Living Time (Columbia, 1972), here far more streamlined than the large ensemble original that was, most unusually for Evans, propelled by a strong rock beat. One of Stenson's greatest strengths has always been his ability to hone in on a song's heartbeat, regardless of its original context, and fold it into the soul of his trio. In his co-arrangement of the lovely Norwegian traditional "Ave Maria" (with singer/kantele player Sinikka Langeland), Jormin, too, proves his mettle at bringing material to the trio that fits beautifully within its ever-expanding purview.

But it's Indicum's three free improvisations that truly demonstrate this trio's greatest strengths, and why Fält has become such an essential side to its equilateral triangle. Not since Reflections (ECM, 1996) has Stenson's trio been so free to express itself both texturally and rhythmically. First with Cantando and now the sublimely stunning Indicum, this trio—the boldly impressionistic Stenson, serenely singing Jormin and restrained yet unconstrained Fält—combines ethereal melodism with gentle grounding to create music that possesses—and moves—both soul and spirit, head and heart.