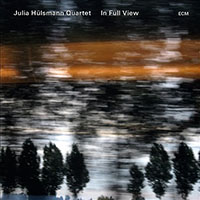 There's no denying the benefit of stable longevity, but neither is there anything wrong with change. Following three ACT recordings that featured her trio—together since Scattering Poems (ACT, 2003)—supporting a series of vocalists, Julia Hülsmann moved to ECM, where the pianist was afforded greater freedom to more fully explore her trio's potential on 2008's The End Of A Summer and 2011's Imprint. Both albums presented a trio beyond anything left to prove and functioning in thoroughly egalitarian fashion, both compositionally and in performance.

In Full View ups the ante, expanding Hülsmann's trio to a quartet with the addition of British trumpeter Tom Arthurs. Continuing Imprint's more outgoing direction has not come at the expense of the gentle elegance endemic to the trio's ECM debut; instead, Arthurs' voice expands the group's reach without losing anything carved out since Hülsmann's move to the label.

Some of the vibe from Wheeler's early ECM recordings—in particular the similarly configured, award-winning Gnu High (1976)—imbues Hülsmann's quartet, especially on drummer Heinrich Köbberling's "Forever Old," which manages to swing gently despite being in 5/4, and an initially darker, rubato piano/trumpet intro that leads to bassist Muellbauer's similarly odd-metered but smoothly flowing and gradually intensifying "Meander," its simmering pulse strengthened by the bassist's robust foundation and Köbberling's subtle shadings. Arthurs' episodic "Forgotten Poetry" is also underscored by a Wheeler connection, its deceptively simple melody weaving through some change-heavy balladry, time briefly contracting and expanding before settling into some understated interplay between Arthurs and Hülsmann until the trumpeter removes himself, ultimately leaving the pianist to ruminate over Muellbauer and Köbberling's firm yet pliant support.

The group also simmers on Muellbauer's quirky "Dedication," Hülsmann constructing a solo of near-perfect poetry, while the initial melody of the pianist's title track is doubled on bass and flugelhorn before a stronger groove leads first to an even more serpentine theme, doubled on horn and piano, before solos from Hülsmann and Arthurs emerge, dichotomic paradoxes of restrained energy that ultimately unfold over more fervent propulsion.

Fiest's "The Water" is one of three covers on In Full View—another change over previous sets' sole non-originals— but it's the best-known. Still, just as Hülsmann's cover of Seal's "Kiss From a Rose" was an unexpected gem on The End Of A Summer, covering Feist here proves the pianist's quartet as capable with a simpler song form as it is more complicated fare.

Beyond the obvious addition of a fourth voice, there's a stronger sense of effortless collective aplomb on In Full View. If Wheeler's spirit looms large over the session, Hülsmann could certainly do far worse; and if Arthurs is a permanent addition to the pianist's decade-old trio, where this sublime quartet goes next will be well worth the attention.