By Ian Patterson
January 11, 2015
Sign in to view read count 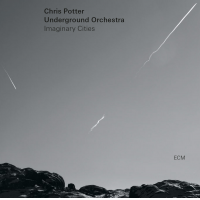 Given the globe-trotting touring on the back of Unity Band (Nonesuch Records, 2012) and Kin (<—>)(Nonesuch Records, 2014) with Pat Metheny's Unity Group it's a wonder that Chris Potter has had time for his own projects. Yet with The Sirens (ECM, 2013)—an acoustic suite inspired by Homer's Odyssey—Potter was in the composing form of his life. On Imaginary Cities Potter shows greater ambition still in blending a string quartet with his long-standing Underground band. Furthermore, electric bassist Fima Ephron and acoustic bassist Scott Colley jointly explore deep grooves alongside the dynamic Nate Smith, while Steve Nelson—a collaborator throughout Potter's decade with Dave Holland—adds textural finesse. It's a potent and compelling combination.

In a sense, Imaginary Cities can be seen as an extension and refinement of ideas explored on Song for Everyone (Sunnyside Records, 2007), Potter's requiem for Michael Brecker that featured strings, woodwinds and jazz quartet. The thread that links these previous recordings with Imaginary Cities is Potter's narrative versatility; pastoral melancholy, funky chamber jazz, cool lyricism and fiery exploration all color the music, particularly on the four-part, thirty-five-minute suite "Imaginary Cities." There is, however, a suite-like continuity to the entire album—with strings informing and shaping much of the music—and an orchestral elasticity perhaps inspired by the Unity Band and contemporary classical music to greater or lesser degree.

Potter lays down his marker on "Lament." Lushly entwined strings pave the way for subtle ensemble ruminations, out of which Colley's lyricism and the leader's billowing tenor solo unfold. When the collective energy subsides the strings return in isolation, like a balm. The melodicism and power of this piece serves as a delightful entrée to the centerpiece of the album, the stunning "Imaginary City" suite.

"Compassion" moves from anthemic, strings-buoyed balladry to more robust terrain where Potter and Adam Rogers share the spotlight; pizzicato strings of a distinctly West African tone bookend the hard-grooving "Dualities," which features meaty solos from Potter and Harris on marimba; "Disintegration" plots a more episodic route, building from Craig Taborn's invernal minimalism and the edgy abstraction of alto saxophone through tightly woven ensemble lines to an exclamative conclusion; the cantering rhythms of the epic "Rebuilding" drive Potter and then Rogers to their most expansive playing, though it's the infectious ensemble lines and strings in counterpoint that are most engrossing.

The rest of the album is equally absorbing. The pulsating orchestral and chamber funk of "Firefly," the darkly atmospheric riffing strings and mantra-like pulses of "Shadow Self" and the rousing, Metheny-esque "Sky"—with Taborn finally cutting loose—in no way pale in comparison to the breadth and imagination of the "Imaginary City" suite.

Virtuosity is a given with these musicians, yet whilst emotive and tasteful improvisations liberally pepper the set, the strength of Imaginary Cities across the entire sixty minutes lies in the harmonious integration of instruments and the fluid dynamics of Potter's imaginative arrangements. The finely layered strands and subtleties of the music reveal themselves more and more upon repeated listening, like sunrise gradually illuminating the details of an unforgettable landscape.