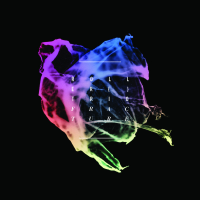 Fracture is an intriguing title for this follow up record to Roller Trio's eponymous Mercury nominated debut from 2012. Recent interview comments spoke of how little that nomination changed their financial situation, so it is tempting to read the title as a reference to the band's relationship with the music industry—after all the album is also their first on their own Lamplight Social label rather than F-ire who handled them previously. Or is the title intended to be a more literal nod to the broken hand that saxophonist James Mainwaring suffered just as they were about to play in the European Broadcast Union Jazz Competition finals in summer 2014? The BBC broadcast that concert and while the injury clearly changed Mainwaring's playing it remained a fine performance. Indeed Mainwaring has latterly felt able to put a brave face on using limitations to shape the band sound, commenting that "I like to use constraints... that makes the music that you produce narrower and that automatically gives it a certain sound...."

Virtue from necessity or not melodic fragments, motifs and riffs are splintered across the wider collection, the melody bringing you in, the constant shifts in the music simultaneously pushing you away—neatly avoiding any accusations of predictability. Initially this can feel like the aural equivalent of Burroughs' "cut up method," but given time the parts cohere to reveal a far more satisfying record than their much garlanded debut. The musicians sound more together stylistically too—able to integrate their different influences into a single music rather than each member trying to lead on particular tracks as on the debut. The much improved production also helps, a clear step up from the debut that was apparently intended to be little more than a collection of demos to sell at gigs.

So a track like "Two Minutes" twists and turns through funk and hard rock shapes , tension being released in lengthier sax bursts from James Mainwaring, but is immediately followed by the near trip hop ambience of "Tracer" which is a sort of jazz collision with Massive Attack or, perhaps more accurately, Jose Padilla or James Lavelle. "Mango" is more leftfield; the oblique percussion in the middle section making the composition feel like it almost folds in on itself as the initial funk rock gives way to a near ambient sax solo over Luke Wynter's heavily reverbed guitar. "Tightrope" too combines heavily effect laden guitar with Mainwaring's sax which using its higher registers has something of a pleading, pained, quality that is highly effective.

The lightness of this oblique funkiness is also a step forward from the debut—opening track "Reef Knot" being a good example in the way that the light intricately rhythmic guitar riff is taken forward with a repetitive horn line before its rhythm dissolves in what initially feels like a glitch but then moves into an engaging circular sax riff. The tension built in this segment is then rapidly released before a more straightforward guitar rhythm emerges ending up in jazz rock territory.

This ability to blend the accessible and the serious, the melodic and the experimental is a real gift that Roller Trio have down pat here—a tune like "Low Tide" is just begging to be used as the soundtrack to a cold war thriller, yet through the switching of sections still manages to allow the band opportunity for both self-expression and musical exploration. Even the admirable "High Tea," which is about as free as things get here, alternates oblique sections that build tension with a melodic release safety valve.

There's a great quote from soul singer Cissy Houston that's relevant here, where she talks about music as ..."a living, breathing thing—you have to understand that it will push and change itself, just to survive... it's going to change right along with what's going down in your life...." Roller Trio have had a fascinating couple of years that can arguably be heard in this great album—"Fracture" is a clear step forward from the promise of their debut and suggests that they will be with us for some time to come. Highly recommended.