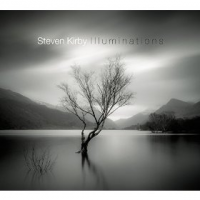 Illuminations—guitarist Steven Kirby's third album, following Point Of Balance (Challenge Records, 1998) and North Lights (Challenge Records, 2003)—is both true to previous form and highly expansive. Kirby uses elements of the sonic palette(s) that helped to color his earlier work, referencing the probing lyricism of John Abercrombie and the straight-to-the-heart melodic qualities shot through in classic recordings from Pat Metheny with Lyle Mays, but he doesn't simply extend on what's come before. In the thirteen years since Kirby's last album, he's refined and expanded his own style(s) of performance and composition, living up to the idea of jazz as an art built on growth and renewal.

The album opens on Mike Connors' drums setting the pace for Kirby's energized "Parabola," the first of nine original tunes on the playlist. Kirby's guitar, Aubrey Johnson's wordless vocals, and Bill Vint's saxophone make for a perfectly balanced combination as the titular arc is drawn in unique musical fashion. "I Hear A Rhapsody," propelled by Ed Lucie's bubbling electric bass, follows. Kirby unleashes a steady stream of sixteenth notes during his memorable solo flight, the rhythm section briefly toys with a half time feel (without committing) during pianist Mark Shilansky's stand, and Vint, not to be outdone, slaloms his way through the changes like an expert skier flying down a double black diamond trail.

Those first two glimpses into Illuminations are marked by a similar sense of vitality, but the game really changes with the title track. Kirby's nylon-string guitar work serves as scene-setter and constant, as the rest of the band builds around it, moving toward a sunny, Brazilian-based vision that readily acknowledges that Metheny-Mays influence. Everybody brings their A game here, but special recognition goes to Johnson and Vint (on flute) for their exchanges at song's end. Kirby then sticks with the nylon strings for an intimate tribute to his wife on the trio-centric "Beautiful Rain," delves into odd-metered territory for "Lake Of Stars," and balances motion against quietude on "Slow Circle," which features some of bassist Greg Loughman's most memorable work on this date.

The album plays on with "May The 4th Be With You," a 6/8 piece that bounds along and finds Kirby taking an aggressive sonic stance. It's the only place on the album where edge wins out in his sound and it's miles away from "A Luz Das Estrelas"—the classically-influenced, Guinga-inspired solo work for nylon-string guitar that follows it. Beauty remains central in the final act(s) of the album, as Kirby creates one stunner after another. First he delivers a wistful, teal-toned take on "Over The Rainbow," spotlighting a mesmerizing performance from Johnson in the process; then he creates picture of heartland and hearth with veiled complexity on "Returning"; and finally, he taps into the placid American visions of artists like Charlie Haden and Bill Frisell for the comforting "Last Song." It's a gorgeous sendoff and a fitting conclusion to an extraordinarily pleasing and diverse album.

Parabola; I Hear A Rhapsody; Illuminations; Beautiful Rain; Lake Of Stars; Slow Circle; May The 4ths Be With You; A Luz Das Estrelas; Over THe Rainbow; Returning; Last Song.