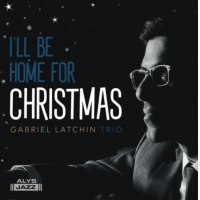 In 2020, when a respected musician decides to record a Christmas album, they invite perhaps the most basic question of all.

"I love Christmas," answers pianist Gabriel Latchin. "You kind of grow up and you know Christmas becomes less important, but I mean who doesn't like Christmas tunes?"

One of the many changes brought forth by the widespread digitization of music is that a century's worth of Christmas songs are now available at a moment's notice, whereas in past years one was limited by one's own personal collection as well as the selection available from local music stores. This is both good and bad; good in that it allows music aficionados the ability to become more selective without exhaustive efforts, bad in that the rest of the world is predictably inundated with cheap holiday cash-grabs each December.

At this point in time there's really only one respectable reason to make an album filled with traditional holiday music, and Latchin caught on to that when he took to the studio with bassist Dario Di Lecce and drummer Josh Morrisson. "It is a Christmas album," he says. "It's definitely a jazz album first and foremost, with a piano trio, you know, trying to swing...and [to] create something people haven't heard before."

Every artist who has ever covered someone else's music claims to espouse that particular philosophy, but Latchin more or less succeeds in it. Individual mileage will vary, but I'll Be Home For Christmas makes for pleasant late-night winter fare. More importantly, its eleven songs offer enough improvisation and personality to keep the mind engaged.

The trio positions "Winter Wonderland" to open the album, a song which succeeds at setting the tone for what is to come. They allow themselves to stray just far enough from the familiar to make their own mark, yet not so far that the tune loses its festive appeal.

They also do something else remarkable, and that is to reconceive the overwrought and simplistic "Jingle Bells" into a song that is actually interesting. The song may never have received a treatment that did anything more than careen through it as fast as possible. While those who expect traditional Christmas music devoid of surprises may find I'll Be Home For Christmas to be too divertive, the album is an early gift to jazz listeners in the mood for seasonal offerings but who are easily bored with or annoyed by the sort of music echoing through shopping malls after Thanksgiving.

Latchin's sole compositional contribution is "A Toast To Friends," a fitting ode to seasonal camaraderie, seated fittingly between the album's title track and "The Christmas Song." Di Lecce's warm bass enjoys greater stage presence here, providing structure for the song, and a salient backdrop for Latchin's amiable rhythm. This piece is one of the many moments within the album which reveal the pianist's artistic potential. Composing music to fit a specified theme is not uncommon, but to create something original that blends unobtrusively within a series of well-known thematic songs is a move requiring a respectable level of self-assurance.

Latchin breaks "Rudolph The Red Nosed Reindeer" out of his stop-motion animation rut, affixing the tune's much-overplayed melody to a breakneck pace. He begins the song playing said melody straight but hurdling through it, seemingly possessed of some great desire to move past the requisite chorus into something with a bit more substance. Poor Morrisson is worked into a lather in keeping up with this pace, and in this way, "Rudolph" becomes the drummer's standout moment.

Much in the same vein, only slower, "Silent Night" opens exactly as one might expect. A lush, soft tapestry set back by drums and bass, while Latchin's piano gently tinkles out the melody. Also much like before, Latchin veers hard off course once he's had his fill of sentiment. "Silent Night" becomes a trio jam session, with the three musicians just narrowly coloring outside of the lines. Yes, it subverts expectations, but this is precisely what Gabriel Latchin set out to do. I'll Be Home For Christmas may be littered with mistletoe, candycanes, wreaths, and gumdrops, but he and his trio plow through it with a mischievous grin on their faces.

With his third studio release Gabriel Latchin begins to emerge from the dawn of his recording career. The pianist is a man possessed of both talent and potential, two things upon which success is invariably contingent. He stated that part of his approach to this album was to ask himself how some of his idols, Bill Evans and Cedar Walton among them, might approach these festive tunes. While that's all good and well, it would behoove the pianist to make his next album a bold statement as to his own character as a musician. With the London jazz scene said to be lit up for him, Latchin's next effort could very well be the one which furthers his music internationally; especially if he is willing to take some creative risks and leaps.

I'll Be Home For Christmas will doubtlessly appeal to lovers of yuletide music. Yet its target audience seems to be those who outwardly despise the stuff, even if deep down they yearn for some of the sentimentality the holiday held for them during childhood.