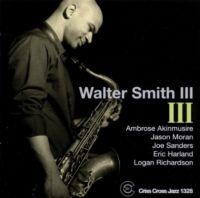 While there are many saxophonists warranting greater recognition, Walter Smith III is consistently emerging as an identifiable voice among the masses. He's been making waves, whether performing across the waters in Spain with bassist Paco Charlin; recording in France on drummer Eric Harland's debut, Voyager Live by Night (Space Time, 2010); with trumpeter Christian Scott aTunde Adjuah for 2008's Live at Newport (Concord); or stints with another trumpeter, Terence Blanchard.

Smith's third release further reveals his maturation as a band leader and composer. It is telling the way the release unfolds; unlike the "play as fast and as complex as you can" mantra, Smith takes a more thoughtful and unencumbered approach to encompass an equally cerebral yet rooted music that is realized by longtime comrades and trailblazers that include Harland, Jason Moran, and rising trumpeter Ambrose Akinmusire

The first notes to be heard are sinuous, visceral and emotive—Smith's luxurious horn soloing in "Working Title." The motif develops into a controlled swing that's tempered by Harland's lively traps and Joe Sanders' exacting bass walk while Smith counters Akinmusire's steamy horn flight with his own energy. 35 years old at the time of this recording, Moran is the "old man" of the group and brings a unique sensitivity to the touching saxophone duo "Aubade," first heard on pianist's Same Mother (Blue Note, 2006). The set mirrors a group rapport that results in work that is organic as a conversation between old friends, an idea that is fleshed out in Akinmusire's "Henya"—a tranquil yet stirring tune that floats like a feather carried by a gentle breeze.

With a group such as this, there are understandably memorable highlights. Alto saxophonist Logan Richardson lights things up in Smith's "Himorme," an up-tempo piece that appeared on Blanchard's Choices (Blue Note, 2009); a boisterous trio workout with Harland and Sanders in "Highschoolish"; and Smith's bluesy "Moranish," inspired by the saxophonist's work on Moran's 2009 project, "In My Mind," a fiftieth anniversary re-imagining of Thelonious Monk's legendary 1959 Town Hall concert.

III culminates with the quiet confidence of "Goodnight Now." The logic and fire of Smith's release is not found in trailblazing feats or complex ideas, but in the consummate way in which the music is delivered. There's something to be said for the art of simplicity.