By Dan McClenaghan
March 30, 2021
Sign in to view read count 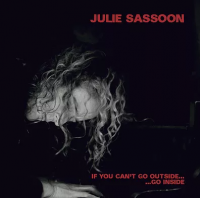 American novelist and short story writer Stephen King has said that he thinks his stories are "found things, like fossils in the ground...relics, part of an undiscovered pre-existing world." He goes on to say that, as a writer, it is his job to reveal as much of this fossil as he can. Interesting, and maybe true. If it is, that can be transferred to music. Sounds as found things, not in the ground but in the air, waiting to be butterfly-netted in or scooped up by an invisible antenna and played on an instrument, and/or recorded; timeless, undiscovered, preexisting sonic relics, with musicians acting in part as conduits.

All of this is speculative of course, and could be seen as a diminishment of the artist's contribution to the creative process. Given those speculations, let us consider British-born, Berlin-based pianist Julie Sassoon's gorgeously mesmerizing If You Can't Go Outside...Go Inside.

Recorded in 2016 at the rbb Kulturradio Studios in Berlin, these two extended solo piano "spontaneous improvisations over composition" performances have a deep immersion-in-creation feeling—no words, no thoughts, only vibrations in the air, crafted from Sassoon's idiosyncratic energy. The twenty-minute opener, "At The Water Tower," sounds as if she sat down at the piano with her composition in mind and extended an antenna to a timeless and ever present wash of the music of the Universe, netting some of it in and applying it to the notes she wrote, to the scaffolding of her ideas. The tune has an appealing containment to it, an insistent rhythmic drive—almost Nik Bärtsch-ian in this respect—which enters another dimension near the tune's end, when "my fingers began to spontaneously move at double speed, leading me somewhere I'd never been before."

Setting the process in motion, using a compositional idea as a springboard for an uncharted journey, the sound eventually going where it will, Sassoon's state of creation leads to something beyond her control, a repeated theme evolving to a free state and an openness to the flow of things.

And so goes Julie Sassoon, using a repeated pattern as a tool for going deeper, then higher, into herself. She follows up that entrancing opener with her twelve-minute "Murmuration" which begins with the mercurial composed section before shifting into a slower, more mystical spontaneity—spare, fluid and introspective—before moving back to the theme, closing out an album which can be counted as one of 2021's top solo piano outings.

At the Water Tower; Murmuration.