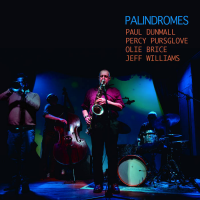 Bassist Olie Brice had an inkling that it might be worthwhile introducing two of his collaborators who had never played together before, British reed titan Paul Dunmall and American drummer Jeff Williams. It proves devastatingly correct on Palindromes. They unite, together with trumpeter Percy Pursglove, on a collective live album—recorded at London's Cafe Oto, in February 2020, during a short tour—which dazzles at every turn.

Williams, a veteran of bands with the likes of Dave Liebman, Stan Getz and Joe Lovano, typically hews close to free-bop leaning charts, but meets Dunmall, an elder of the unfettered excursions of the UK free scene, halfway. Both Brice and Pursglove similarly channel that vibe of outside practice informed by inside experience. As a result, swing and tonal harmony surface spontaneously amid the freewheeling exchanges which retain the capacity to surprise, as evidenced by the way a fierce passage with Dunmall erupting in stentorian bellows suddenly and unexpectedly dissipates to near silence.

Dunmall, of course, is thoroughly grounded in the tradition, with John Coltrane his particular lodestar, but he makes consonance part of his armory too, as the horns swirl in frequent close attendance. Pursglove exhibits the full range of modern trumpet wizardry as he splutters, snorts and wheezes but allies texture to a lyrical sensibility, as he shows in duet with Williams' drums towards end of "Tattarratattat -1," where he stretches his melodic figures ever tauter until they become continuous and prone to disruptive outbursts. Williams, who shrewdly colors, accents and propels throughout, has a role in another highlight too, as the saxophone & drum duet in "Tattarratattat -2" goes fully Interstellar Space.

Moods change like the weather on a windy day. With four such mature talents, while not exactly self-effacing, they nonetheless navigate a near-perfect balance between solo and ensemble. At one point, Pursglove seems to be about to really let loose, but chooses instead to stop, leaving Brice alone in the spotlight, where he exerts the muscular wiry gravity on display during so much of the two half-hour-long pieces. Even after repeated spins, listening feels like being on the same journey of discovery as the musicians, one illuminated by the palpable joy of creation with like-minded spirits.