By Larry Taylor
October 7, 2012
Sign in to view read count 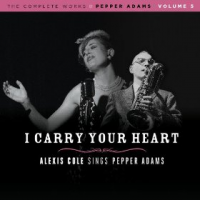 I Carry Your Heart; Alexis Cole Sings Pepper Adams is a stunning piece of work. The lyrics, pure poetry; the music, cerebral and swinging. This creation is even more amazing when seen as part of a five-volume production covering all of baritone sax legend Pepper Adams' work.

Producer Gary Carner got the idea for a digital box set, Joy Road: The Complete Works of Pepper Adams (Volumes 1-5), to be put out on Motéma Music. Subsequent to Cole's vocal CD was Joy Road Sampler (Motéma, 2012), which contains highlights from all four volumes. All discs will be available at a later date.

Carner became interested in the project in the mid-eighties. "Now," he says, "after 28 years of research, it has become a crusade...to maintain the historical record of his [Pepper's] life and work" Also a meticulously researched Pepper Adams' Joy Road: An Annotated Discography (2012), has been published by Scarecrow Press.

Born in 1930 in Michigan, Adams' career was too short. He was recognized as one of the top performers on his instrument. He began, though, on tenor sax and clarinet. At 16, he moved to Detroit and switched to baritone sax. In 1947 he joined saxophonist Lucky Thompson's band, and later worked with trumpeter Donald Byrd.

His style differed from others, including Gerry Mulligan and Serge Chaloff. On the big, bulky bari, Adams played at the rapid pace of hard bop. Later, he became part of Charles Mingus' band, until the bassist died in 1979. Shortly thereafter he was a founding member of the Thad Jones Mel Lewis Remembered. Unfortunately, Adams died in 1986.

During his life, he was also a composer of great output and talent. Carner chose to highlight the versatility of Adams' compositions by placing the music in different settings.

He secured Chicago pianist Jeremy Kahn to record Vol.1 in a trio format. Next, he chose Atlanta-based pianist Kevin Bales to assemble a quartet for Vol. 2, with guitarist Barry Greene featured. On Vol. 3, baritone saxophonist Frank Basile, leads a sextet, and on Vol. 4, Carner brought Kahn back with his trio and a special guest, baritone player Gary Smulyan, a devoted Adams follower.

Adams' compositions are sung by the highly rated Cole. The New York-based vocalist was recommended by saxophonist Eric Alexander, who had recorded with her on a Fred Hersch album. For this first ever pairing of his music with words, Carner got poet/lyricist Barry Wallenstein, his friend and mentor at City College of New York (CCNY).

Rearranging Adams' seven ballads to various speeds and styles, and pairing them with Wallenstein's richly literary lyrics, was the task. Cole comes up a winner here with her straightforward interpretations, honoring the integrity of the poetry and always swinging.

On "I Carry Your heart," the drums' explosive beat drives a tenor chorus as Cole belts out the lyrics. Another highlight is the swinger, "Now In Our Lives." Again tenors carry on beautifully with superb improvisations, trading bars at the end. With "Urban Dreams," Cole's shows the influence of Mark Murphy and Kurt Elling, as she delivers the lines with vivid melodic embellishments.

"Julian," dedicated to Cannonball Adderley, is the longest, at 10 minutes. With its dreamy beginning, it suggests a languid early summer day. Saxophones and drums take off, though, sprinting to a piano foray. All prepare for Cole's winning vocalese refrain.

The volume ends with a reprise of the title tune taken in a lovely up-down, high-low pattern. This release certainly whets the appetite for the remaining four volumes.