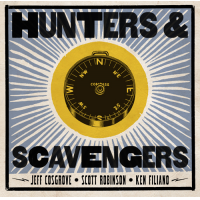 In the 1980s, artist Jenny Holzer created short, pithy statements projected by LED lights in museums and onto Times Square. Her now famous "Abuse of Power Comes As No Surprise" text sums up not only the #MeToo movement and the #BlackLivesMatter cry, but also to some extent, the music industry. The vertical construction of many jazz ensembles, like in corporations, gave us a leader with an often interchangeable rhythm section. This trend toward verticality began to be reversed in improvised music, creating a more democratic effort with leadership roles spread across the group.

This horizontal approach is at the forefront of Hunters & Scavengers, a trio recording by Jeff Cosgrove, Scott Robinson, and Ken Filiano. It is the embodiment of a cooperative improvisation outfit. Drummer Jeff Cosgrove has turned heads of late with his work with Matthew Shipp, William Parker, Ivo Perelman, and Mat Maneri. His approach is to act more as a colorist, than a pulse generator. That approach suits bassist Filiano just fine. A veteran of nearly 200 recordings with musicians like Tony Malaby, Connie Crothers, and Anthony Braxton, his proficiency equals that of Barry Guy, Drew Gress, and Mark Dresser. Then there's saxophonist Scott Robinson, who might be the most underrated multi-instrumentalist in jazz today. His command of a menagerie of horns is on par with that of Anthony Braxton and Vinny Golia.

What this trio accomplishes in ten tracks, nine improvised and one by Ornette Coleman, is the concept of a republic. This equality amongst its members might have begun in Bill Evans' trios where Scott LaFaro and Paul Motian where freed from keeping time, but it has reached a second zenith here in these pieces. A piece like "Simple Justification" roils with a wintery covering of bowed then plucked bass, cymbals like tiny birds, and the plaintive calls of Robinson's tenor saxophone. Together, as one, the music flows, streams, and fills space with an almost unconcerned naturalness. The same is true of "Song Of The Cuddle Fish." Working to make a soundscape, the trio creates eerie textures and "Field Test," in which the emphasis appears (if this is possible) to be more of feel than sound.

If you were to listen to this recording, it might be best to start with Ornette's classic "Lonely Woman" as the key to unlock the remainder of the music. Sans a leader, the melody is played by each musician as if they were charged with holding up all the tent poles of the composition. The music is a common cause here, and the three are in continuous service of the sound.