BY IAN PATTERSON
February 16, 2009
Sign in to view read count 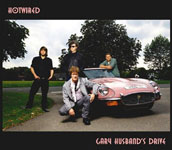 It's a happy state of affairs when a new band gels and the chemistry realizes, as far as is possible, the ambitions and intentions of the leader. Gary Husband must be reasonably delighted with the vibrant horn pairing of experienced saxophonist Julian Siegel and newcomer trumpeter Richard Turner, which brings such thrust and zest to Hotwired. He must be similarly thrilled with the empathetic partnership he has struck up with bassist Michael Janisch, which swings the session mightily.

Drawing inspiration from gutsy acoustic combos such as those led by drumming legends Tony Williams and Elvin Jones and trumpeter Freddie Hubbard Hotwired succeeds in sounding utterly contemporary, and it would make a powerful soundtrack to a gritty, big screen urban drama.

The album roars into life on "The Defender" as trumpet and saxophone come together like ignition wires that spark the engine of drums and bass—Gary Husband's Drive is off and running. The approach taken by what is a conventional set-up is refreshing—straight-ahead language merges with free-jazz vocabulary and subtle avant-garde leanings. Hotwired sounds impressively like a fusion of Miles Davis' s two great quintets of the '50s and '60s.

The playing is continuously absorbing; saxophonist Siegel is equipped with the fearlessness of Coltrane and the purring lyricism of Wayne Shorter, and his solos lead the listener on fascinating excursions through the ever-changing architecture of Husband's compositions. Initially conceived of as a trio, Husband, looking for an extra gear, brought in Turner, and his nicely rough-edged tone oozes confidence and flair. On "Heaven in my Hands," his dreamy trumpet phrasing invests a Milesian vibe on the tune, further suggested by minimalist dabs of electronic keyboards, setting up a charged exchange with Siegel which follows.

Husband has a well-established reputation as a composer of modern jazz, fusion and impressionistic piano works; here, the framework of bop/hard bop brings out the best in him, not only as a writer of tunes which display ambition and intelligence in equal measure, but as a drummer too.

Renowned as a fusion drummer with few peers, Husband's stick work in this acoustic quartet is a revelation, and outstanding throughout—complex yet swinging, driving and buoyant, deft and colorful. It is worth listening only to the drums at least once, although it would be a challenge to block out the bass of Janisch, who occupies all the right spaces, and coaxes such a wonderfully rich, earthy tone from his upright.

It is hard to pick out highlights from such uniformly strong pieces, but the loping "10/4," with a fine solo from Turner, is one; the slow suspenseful "The Agony of Ambiguity" another; and, for sheer ambition, the Wim Wenders-inspired "Angels Over City Square," which encapsulates the modern, urbane sophistication of this quartet. Gary Husband's Drive has produced a wonderful debut recording. If these guys sound this good, this tight, from the green light, then the road ahead of this quartet is an exciting one, full of promise.

The Defender; Heaven in my Hands; 10/4; The Agony of Ambiguity; Deux Deux's Blues; Take the Coltrane Around; One Prayer; Angels Over City Square; Take 5.