By Greg Simmons
December 3, 2011
Sign in to view read count 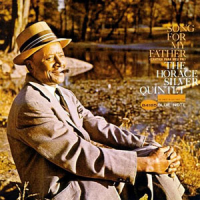 The nice thing about reissuing classic, fifty year-old records is the benefit of hindsight; delving into a well-established catalog that's been lauded for decades helps ensure that every release will be desirable. The classic Blue Note Records catalog of the 1950s and '60s is about as evergreen a collection of albums as could be imagined. There are so many great titles that it's difficult, if not impossible, to find a stinker in the lot.

In reissuing a true classic like Horace Silver's Song For My Father (1963), Music Matters' tacit goal is to bring something new to the record, but not by the typical inclusion of substandard, rejected bonus tracks, or with aborted takes and studio chatter. The label's goal is simply to make the best possible pressing of the album, using the original master tapes as the source, to capture every possible detail of the recording session. As usual, they've succeeded admirably.

Silver's band in those years had a rotating cast of musicians, many of whom would go on to be A-listers in their own right. Perhaps only Art Blakey's Jazz Messengers—a name given to Blakey by Silver—was a greater incubator of up- and-coming talent. Most of this album features a front line including the great Joe Henderson on tenor sax and a relatively obscure Carmell Jones on trumpet. Their attack on the melody of the title track, following Silver's opening piano bounce, is clear and blue. Silver takes the first solo turn with a mid-tempo groove, rich with resolving minor chords, before handing it off to Henderson, who was already leaning towards more adventurous statements in his playing.

The lone track not penned by Silver, Henderson's "The Kicker," is by far the most aggressive track on the record, with thunderous drumming from Pittsburgh's favorite son, Roger Humphries. And only "Calcutta Cutie" features an entirely different lineup, with trumpeter Blue Mitchell and the shamefully neglected tenor saxophonist Junior Cook.

Silver was known to be a perfectionist during recording sessions (one of the reasons he released so few live records), insisting on very high quality sound for his albums. On this date the piano—a perpetual Achilles heel of recordings engineered by Rudy Van Gelder—sounds better than usual, with at least some of the scale of the studio's Steinway D preserved intact. With such a high quality source, it shouldn't come as any surprise that the Music Matters' reissue provides details that would be hard to discern on lesser pressings.

Only two things hinder this release: first, these pressings are expensive; second, they are only issued on 45RPM vinyl, so a good old-fashioned turntable is a requirement. But for a serious lover of Horace Silver, this Music Matters reissue is likely the highest quality pressing that will ever be seen. Song For My Father is a masterpiece worthy of such high-minded treatment that rewards with great music and the ultimate in sound.