BY DAN BILAWSKY
December 3, 2011
Sign in to view read count 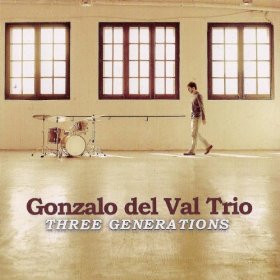 Spanish jazz musicians need not produce music that overwhelms with Iberian-influenced sounds or seduces with the so-called "Spanish Tinge" at every turn, and drummer Gonzalo Del Val's trio is proof. While Del Val's music isn't completely devoid of elements endemic to his musical DNA ("Malena"), the drummer's broad outlook goes well beyond any one place or style. On Three Generations, Del Val uses the age-old piano trio format to create a program of music that, strangely enough, is unified by the very concept of variety.

By opening this album with a waltzing "Question And Answer," from the pen of guitar master Pat Metheny, Matt Dennis' classic "Will You Still Be Mine?," and the Thelonious Monk-ish original, "Planeta Miralta," Del Val links his music to those who have come before, but doesn't dwell on America's past jazz triumphs. "Alone In Brooklyn" brings things back to the modern day, arriving with glazed austerity and a nocturnal chill normally associated with Nordic artists on the ECM label, and departing with an ominous, odd-metered ostinato that builds in intensity and power before the music peters out.

While Del Val deserves much of the credit for developing this diverse aural portfolio, he isn't alone in delivering the goods. Pianist Marco Mezquida and bassist David Mengual prove to be perfect foils for one another, while also proving to be simpatico stylists. They get peppy and zany together, with Mezquida delivering lines that sound like a cross between a Christmas carol and a Vince Guaraldi number, while Mengual delivers some scratchy arco effects ("Los Cuatro Muleros")—but that's just the tip of the iceberg. Del Val and his trio mates also cover odd-metered terrain ("El Siete De Ameyugo"), back guest vocalist Celeste Alías with flexible and supportive accompaniment ("Malena"), and muse in musical fashion on the album-closing "Oxígen," which proves to be a gentle way to end an engrossing fifty minutes of music.