By JOHN SHARPE
September 2, 2019
Sign in to view read count 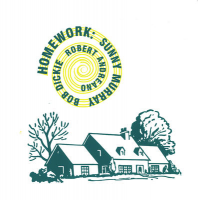 Sunny Murray, who died in December 2017, was one of the pioneers of free-jazz drumming, having established himself on seminal discs with pianist Cecil Taylor and saxophonist Albert Ayler during the 1960s. Homework presents Murray in 1994 in a bare-bones trio format with a pair of young Philadelphia musicians who went on to work in indie rock. Guitarist Robert Andreano, then 22 years old, relates in the liner notes how his friendship with Murray developed and the idea to record together was born. They picked up bassist Bob Dickie on the way to the studio and made the LP (of which just 22 copies were pressed) which is reissued here for the first time in expanded form.

Murray tailors his playing to the situation, fitting in with his confreres, though also displaying enough of the unruly embellishments and dashes of brilliance which made his name. He maintains momentum throughout, often but not always without recourse to regular meter. He's given his head on the unaccompanied 18-minute "Why You Need A Lawyer When Your Pants On Fire," where his shimmering hihat and rumbling drums ebb and flow like the ocean, even occasionally evoking a drum kit slowly tumbling down a flight of stairs, in a freewheeling exposition. Several times he sounds as if he approaching an ending, only to find more things to say.

In spite of Murray's legendary status, both Andreano and Dickie avoid being overwhelmed. In fact, during the finest episodes, they more than hold their own in bracing three-way conversations. The title cut is particularly engaging, beginning with mournful dirge-like guitar and sensitive smoldering drum and bass, before more open exchanges ensue. Also notable is the intermittent jazz-funk of the angular "Memorial Day," where chiming guitar and arco strokes vie with Murray's pulsing drums.

Slightly less memorable are the ticking groove of "Swell" and the eventual loping beat of "Good Things," which features Dickie on bass clarinet with Andreano taking over the bass chair. On the former you can sometimes sense where ESP founder Bernard Stollman was coming from when he commented that the tape sounded like Jimi Hendrix meets Albert Ayler, although they shun the wild abandon which that implies. However where his description almost comes into its own is the final "In," which cuts in at roiling intensity, before stopping all too soon after just over 90-seconds.

This is a welcome opportunity to hear Murray in relaxed form during a less well-documented phase of his career.

Homework; Swell; Good Things; Why You Need A Lawyer When Your Pants On Fire; Memorial Day; In.