By Dan McClenaghan
March 13, 2005
Sign in to view read count 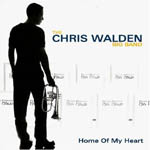 German-born, Los Angeles-based composer/arranger/flugelhornist Chris Walden looks way too young to be this good at a task as daunting as big band writing. He looks almost too young to be sitting in with the band, though he is pushing the ripe old age of forty. But he started early at the art, writing big band arrangements while he was still in high school, and later putting together the charts for the Frankfurt Radio Big Band and the RIAS Big Band. Since his move to Los Angeles, he's written arrangements for Nancy Wilson, Barbra Streisand, Sheryl Crow, and Christopher Cross, and somewhere in there he's scored more than thirty feature and TV movies, including his current work scoring projects for the SciFi Channel (I thought I'd heard some good sounds there). The Chris Walden Big Band is composed of some of L.A.'s finest studio and jazz artists, and with them he's put together a marvelous debut with Home of My Heart.

The disc is very much a traditional big band outing—arrangers like Bob Belden and Don Sebesky come to mind for comparisons—full of interesting song choices. The set opens with the classic "Cherokee," bright and sassy, followed by some cool and subtle harmonies on Christopher Cross's "Rainy Day in Vancouver." Dave Gruisin's "Mullholland Falls," Charlie Haden's "Here's Looking At You," a great jazzed-up version of John Williams' "Star Wars"; and vocalist Tierney Sutton sits in on Gershwin's "How Long has This Been Going On."

And much more. This is 77 minutes of music, consistently fine sounds all the way, with a very cinematic feel. The highlights for me are Walden's own compositions, "Film Noir parts 1-3," and the title tune. Here's hoping for continued success for Walden in his film work, so he can bankroll—nobody makes money at these big band things—a big band disc of all his own material.

Visit Chris Walden on the web.