By NENAD GEORGIEVSKI
September 10, 2017
Sign in to view read count 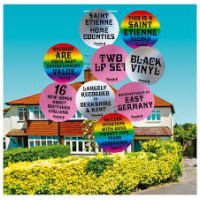 With the brief radio announcement intro in the shape of "The Reunion" and the follow-up song "Something New" begins a quite delightful album by the British indie pop band Saint Etienne. On the following tracks, the band slowly pulls listeners into an imaginary travelogue, casting its net over our listening minds. This ninth offering, named Home Counties is a captivating and addictive affair full of joyous and sunny pop songs where the band dives deep into its memories and feelings about London suburbs from their youth. Pastiches of everyday British life are not that uncommon in pop music as the Beatles have done that successfully, for eg. with "Penny Lane" or Kinks with "Are the Village Green Preservation Society."

With this outing, Saint Etienne hasn't altered its sound and approach that much, but this time the songs are collected into a cohesive concept album of sorts. Across 19 songs, the band successfully does what it has been doing for the past 17 years— creating immersive collages consisting of best pop sounds both from around the world and from different eras. The band's music, which is a role model of how modern pop music should sound like, blends the past and the future, and the result is a beautiful and engaging melange of various strands of music ranging from Northern soul, French pop, disco, acid house, Motown mixed with touches of Bossanova, hip hop, dub—all mixed in an adventurous palette of musical colors, where the songs are driven by Sarah Cracknell's dreamy and gorgeous vocals.

Consequently, this album is multi-layered and the songs showcase the band's gift for orchestral pop with Burt Bacharach like- melodies, creating lush soundscapes that are awash with sonic details. Each song is carefully arranged and recorded, offering an inviting tapestry of unusual melodies, lovely harmonies and busy beats that meld slight hip-hop and dub influences, and scores of interweaving counter melodies. This is Saint Etienne's modus operandi where simple tones are built upon each other to create an intricate design. There is a nice flow from the first to the last song but there is no tension or drama whatsoever. To their credit despite the vivid colorfulness of the songs none of it sounds overcooked. Most of the songs, however, are light and gentle, wistful and pensive, feathery even. But songs like "Dive" Underneath the Apple tree" and 'Heather" "with its propulsive beats and irresistible harmonies and the sassiest vocals from Cracknell suggests that there's still plenty of life.

Home Counties is one more trip into Saint Etienne's joyous creative world. It's a beautiful record in a line of accomplished and eternally pleasant Saint Etienne albums. Even though it doesn't really deviate from the songs and sounds it has created in the past it still offers a reinvigorated sound and beautiful and interesting music.

The Reunion; Something New; Magpie Eyes; Whyteleafe; Dive; Church; Pew Furniture Restorer; Take It All In; Popmaster; Underneath the Apple Tree; Out of My Mind; After Hebden; Breakneck Hill; Heather; Sports Report; Train Drivers in Eyeliner; Unopened Fan Mail; What Kind of World; Sweet Arcadia; Angel of Woodhatch.