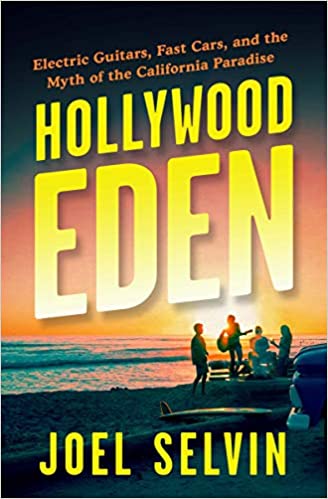 Joel Selvin may well grab the reader's attention with his very first sentence of Hollywood Eden. and quite likely never lose it over the course of the two-hundred sixty-some pages that follow. In depicting California as a state of mind more than a geographical area, the veteran scribe posits that space as an insular bubble populated by the privileged and well-connected, far-removed from any reality other than its own. At the same time, Selvin strongly implies that the prevailing culture of today is an all too similar mind-set, one simply writ ever larger and more pervasive in the decades since the late Fifties where he begins his narrative.

Notwithstanding a wealth of detail that at times threatens to turn ponderous in its minutiae, the author wisely refused to take his subject (s) too seriously. In fact, an increasingly tongue-in-cheek air begins to permeate Hollywood Eden at the fifth and sixth chapters, so much so via the semi-serious (?) use of colloquialisms ('wicked smart,' 'up-and-comer on the scene') almost make it seem Joel Selvin is subtly ridiculing the various characters he's discussing. Not that they're not ripe for satire, i.e., jack-of-all-trades poseur Kim Fowley.

Sketching the people and places no less broadly than the California lifestyle, those elements are inextricable from each other. To wit, the ex-SF Chronicle pop music critic's take on the kindred spirit of Jan Barry (of Jan and Dean): "Jill Gibson's ...[beauty]...was such an accepted part of her life that it barely mattered to her at all." Private parties at which Frank Sinatra appears are hardly less common than the questionable behind-the-scenes business machinations of the plethora of record labels in existence around Los Angeles: at this point, the City of Angels might not have been the hub of commerce New York City was, but its aspirational endeavors may well have outnumbered the Big Apple's.

Electric Guitars, Fast Cars, and the Myth of the California Paradise comes to an almost screeching halt, the extremely abrupt nature of which is in keeping with the speedy pace Joel Selvin maintains virtually throughout the book. That very tempo is nothing so much as a reflection of the fast cars that became emblematic of Cali culture at the turn of the Sixties. In that context, the protracted account of the bumbled kidnapping of Frank Sinatra, Jr. comes as an errant detour off the main highway of the narrative. The writer doesn't exert any tangible dynamics, but instead sounds almost as if he's been caught up in the inexorable yet unhurried movement(s) of the various characters' toward confrontation(s) with their respective destinies. Once and future Beach Boy Bruce Johnston's is one of the more positive.

If that sounds melodramatic, rest assured the book itself is not. Selvin allows the facts to speak for themselves—he duly notates his research in the 'Acknowledgments'—and thus has no need for contrivance as he details the obsessive nature of an increasingly reclusive and eccentric Phil Spector—who has to face the commercial failure of his recording studio labor of love, Tina Turner's "River Deep, Mountain High"—or the troubled creative and personal (d)evolution of The Beach Boys' Brian Wilson—who receives the deserved public acclamation that eluded his aforementioned counterpart for the compulsively-crafted "Good Vibration (but only after suffering the bitter disappointment of a lukewarm mainstream response of Pet Sounds (Capitol, 1966).

The suspense that's been building subliminally since the outset of Hollywood Eden can overtake a reader by the time this tragicomic tale concludes. Yet the altogether sudden denouement of this fable is perhaps only inevitable, given how it is based on the superficially (artificially?) sunny outlook most of its cast assumed early in this story (see the blissfully independent role model for the movie character 'Gidget,' Kathy Kohner). If the paradigm shift that occurred with the ascendance of The Beatles seems to be given short shrift by both the author as well as most of his subjects—with the notable exception of The T.A.M.I. Show film of 1964 and its sequel—that's only because cultural and psychic self-satisfaction was the foundation of their world view.

In his exquisitely sanguine 'Prologue,' Joel Selvin hints that any intrusions to the contrary for the pampered likes of Ol' Blue Eyes' daughter Nancy were as anathema to the preservation of an idyllic mindset as they have become to the various socio-political tribes of 2021. From that perspective, reading Hollywood Eden is less like holding up a mirror to contemporary lifestyle and more akin to the experience of perusing a photo album, at various junctures of which process we have to stop and nod knowingly as we ponder how we got here from there.