By Nenad Georgievski
February 28, 2015
Sign in to view read count 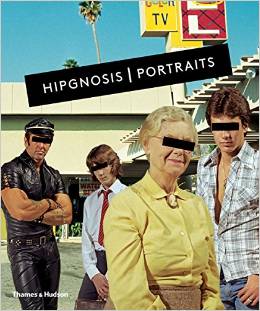 When I was a kid I used to regularly search through my uncle's vinyl collection and there was one particular photograph that continuously arrested my attention and imagination -the inner sleeves of Pink Floyd's Wish You Were Here. (Harvest, 1975) The photograph of two people shaking hands while the other one of them was in flames was very fascinating and mystifying, long before I fell in love with the music that the cover represented. This and many other record covers and designs, as I later found out, was the work of group of artists that worked under the banner of Hipgnosis.

As is well known, album art is tightly linked to our collective musical memories and when people think of their favorite records, usually they picture the covers. The artwork on the covers created specific perceptions and moods and it kind of prepared the listeners for the auditory experience that was to follow. The musicians tried to convey the message of what was the music about with their audiences and to connect and bond with them. That connection and bonding was Hipgnosis' specialty. For 15 years, before the triumvirate consisting of artists Storm Thorgersen, Aubrey "Po" Powell and Peter Christopherson, parted its ways in 1983 it created stunning artwork for various music acts such as Pink Floyd, Led Zeppelin, The Rolling Stones, Peter Gabriel, John McLaughlin, Genesis, T-Rex, AC/DC, Paul McCartney to name but a few. Hipgnosis' daring, surreal, innovative and ground breaking covers used mystery, menace, humor and sexuality, and the result was some of the most memorable cover arts of all time. Back in 2008, a book was released For the Love of Vinyl: The Album Art of Hipgnosis which collected Hipgnosis' cover art.

On the other hand Hipgnosis Portraits tells about another side of its artwork and concepts and ideas that relate to its designs -the portraits. Divided in two chapters, "Imagination" and "Realization," this book seems like a walk through the studio's ideas before they were turned into works of art. The first chapter consists of stories and photographs where Audrey Powell through his detailed and fun to read notes showcases how ideas came and the processes and circumstances that turned those ideas into iconic artwork or publicity photographs. In it's heyday, the studio pioneered all kinds of innovative visual techniques which translated into instantly recognizable artwork. It's novel approach was predominantly photography-oriented and what this book gives a glimpse of are the many photographs that were part of the process or portrayed different ideas.

The fun comes from all sides, both from the anecdotes and various stories in the notes to drummer Keith Moon posing naked with a fur stole covering only his intimate parts. On other occasions, there are both photographs that presented source of inspiration and the actual outcome like Pink Floyd posing in front of its equipment as inspired by a photograph of F-4 Phantom fighter plane.

It's a real treat to read these stories about how ideas were presented to artists and more often than not both the ideas and the artwork were sometimes rejected by the artists. You are as important as your last work. Some of the examples show how bands rejected presented ideas for some of its records, like the band Queen for its famed greatest hits collection or The Rolling Stones rejected a genius idea where the band members were presented as satyrs for the Goats Head Soup album (Rolling Stones, 1973). Even the relationship with Pink Floyd is well documented for various album covers and publicity photographs including rejected ideas about a tour book from the US tour in 1972.

The "Realization" chapter is a showcase of those portraits, most of them unseen. The visual vocabulary of Hipgnosis' imagery was invented on the spot and it was rich enough to be adopted by various artists from that era who were open to search for a new point of emphasis. The portraits are enigmatic and different, and reveal their meanings only upon closer inspection, luring the viewer into a mysterious labyrinth of interpretations.

Hipgnosis: The Portraits is a compilation of groundbreaking design and photography, and it's almost as much fun as searching through those old bins, only cleaner. The only things that one can object about it is that there aren't more of the photographs and work in progress items included as it feels more could have been included. This book is a visual testimony to one of the greatest and innovative creative forces of the 20th century. Hipgnosis was and still is a conjurer of visual magick. Its artwork is beautiful and yet it is complex enough to disclose to its full meaning only to those who tend and seek to listen visually.