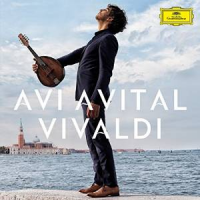 On his debut recording, Bach (2013, Deutsche Grammophon), mandolinist Avi Avital played a pristine, clinically punctilious JSB. It is therefore no surprise that Avital moves a little earlier in the Baroque Era to produce a very similar collection by Antonio Vivaldi. Avital is an Israeli born in 1978 who took part in a local mandolin youth orchestra. He has previously recorded a rich collection of Klezmer, Baroque and contemporary classical music. He now contuse his look back with the Red Priest.

Like Bach, Vivaldi is a recital of selections, some intended for lute or mandolin and some transcriptions for mandolin. Avital shakes things up with the A minor Concerto (RV 356) for Violin from L'estro armonico and the Concerto for Lute in D (RV 93). His transcriptions are seamless and satisfying, betraying neither poor transfer nor performance. He includes "Summer" from The Four Seasons, beautifully realized played. Avital closes the disc with a traditional Venetian tune, "La biondina in gondoleta" sung by tenor Juan Diego Florez. This is a nice bit of programming with a period popular tune included among the straight classical. This is a very satisfying listen.