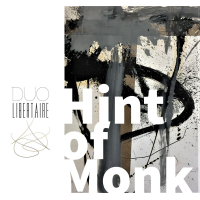 At the dawn of the second century of Thelonious Monk's (1917-1982) music, one must wonder just what the great man would think of Duo Libertaire's homage recording Hint Of Monk. During his lifetime, actually before his music was included in the jazz canon, the only tributes available were Steve Lacy's solo soprano saxophone recordings and School Days (Emanem, 1975) by the Steve Lacy-Roswell Rudd Quartet. After his death, the flood gates opened with recordings by the Monk-dedicated quartet Sphere, Misha Mengelberg, and Anthony Braxton, to name but a few. At the century mark, dozens of Monk tributes appeared, the choicest being the completist Monk's Dreams: The Complete Compositions Of Thelonious Monk (Sunnyside, 2018) by Frank Kimbrough's quartet and guitarist Miles Okazaki's solo Work: The Complete Compositions Of Thelonious Monk (self released, 2018).

Turning the page (century-wise) this tribute by guitarist Pascal Bréchet and drummer Thierry Waziniak is quite unlike the releases cited above. It is even dissimilar to the guitar-drum duo Hat & Beard: The Music of Thelonious Monk (Trio Records And Productions, 2013) by Ken Aldcroft And Dave Clark. While Aldcroft & Clark play covers in a waking and insouciant manner, Bréchet and Thierry Waziniak approach the oeuvre as if in a dream. Their libertaire music (anarchy music) is a misnomer. Their music is best described as fractured or fragmented Monk. Their ten covers, plus one original composition, allude to Monk's works as if there were secret codes that only a skilled cipher (or Monk partisan) could solve. Of course that is the delight of their Hint Of Monk. Bréchet trades in Monk fragments while Waziniak rattles and jangles the pulse. "Trinkle Tinkle" is traded both in open conversation and as coded dialogue. Same for "Work," which is a most delicate dance of abstraction, but not nearly as abstract as "In Walked Bud," identifiable only from its euphonious dental records. The 'straightest' version here might be "Hackensack," but even this cover is cloaked in the metaphysical. So, what would Monk say? "There are no wrong notes; some are just more right than others."