By JOHN SHARPE
November 8, 2015
Sign in to view read count 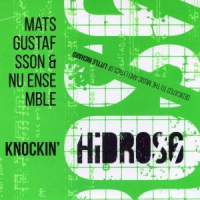 An avant-garde jazz composition based on the songs of '50s rocker Little Richard. Really? Yep, that's the premise behind Swedish reedman Mats Gustafsson's large scale work recorded at the Krakow Jazz Autumn in 2013. Although best known for his small group output with The Thing and Fire!, Gustafsson has regularly assembled bigger groupings during his career, most recently his Fire! Orchestra. Through a festival commission, Gustafsson was granted the opportunity to convene the 12-strong all star Nu Ensemble which rehearsed for four days, before performing "Knockin'" on the last evening.

All the fruits of the residency, including solo and group improvisations, were collected in a sumptuous 5 CD, 2 LP, 1 DVD box set, also entitled Hidros 6: Knockin', (Not Two, 2014). Perhaps calculating that the size of that package militated against a wide circulation, Not Two has now issued the final concert as a single 70-minute CD to allow this extraordinary concept to receive the attention it deserves.

A significant part of the success is down to the amazing tour de force by Norwegian experimental vocalist Stine Janvind Motland who brings an affecting mix of vulnerability, sexuality and sheer prowess to the party. Gustafsson selected a line from each of 20 favorite Little Richard songs to serve as the basic text for Motland to embroider. Via a graphic score Gustafsson also ensures ample solo space for his illustrious cast, as well as composed sections peppered throughout the performance.

Through such compositional intent, Gustafsson mostly avoids the default setting of full band blow outs which crowd other hefty improvising bands. Both pianist Agusti Fernandez and erstwhile wind player Joe McPhee utilize the organ which gives the date a particularly opaque character at times. Drifting ambient sounding sequences and some of the samples from the turntables of Dieb13 are the only parts which translate less well to disc.

The piece begins with Motland's spectral susurrations and ethereal squeaks and taps from Fernandez operating under the lid of his piano. Words gradually form in song extracts repeated against the slowly accumulating tumult. A twin drum tattoo supplied by Paal Nilssen-Love and Kjell Nordeson supports a passage of wailing tenor saxophone from McPhee, until it suddenly cuts to leave Motland alone. She runs words together to form swooping roller coasting loops which evoke electronic samples in their clipped iteration. By the time the collective punctuations gain the upper hand her voice has become pure sound.

Trumpeter Peter Evans takes over from twanging elastic bass in "Part 2," firstly in tandem with Per Ake Holmlander's tuba, then unaccompanied in distinctive 100-notes-a-minute mode, as he dragoons technique and texture in pursuit of his vision. Finally his trumpet leads a brooding melody, bolstered by a reed counter point, which builds to a frantic crescendo from which the leader's marauding bass saxophone erupts.

Motland dominates "Part 4" with her anguished recitation and then an electrifying display in which she yodels, soars and restates lyrics until they lose any meaning. Engulfed by a abrupt orchestral interjection, her voice reappears in the company of vibes and a bass groove, intoning "You Keep On Knocking But You Can't Come In," ultimately with just spare bass drum accompaniment until she eventually ceases to bring the breath-taking piece to a conclusion.