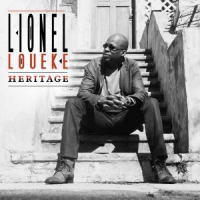 Lionel Loueke's two previous Blue Note recordings—Karibu (2008) and Mwaliko (2010)—displayed his usual virtuosity as a guitarist/vocalist who links his West African Beninese musical roots with a modernist jazz outlook that is uniquely his own. On Heritage, he's assembled new musicians and hooks up with innovative pianist Robert Glasper, who coproduced and performs on the album.

Glasper's work as a producer—as witnessed on his acclaimed Black Radio (Blue Note, 2012)—is the perfect fit with Loueke's eclectic ideas. The guitarist's African-themed compositions, combined with the pianist's hip flavor, is a recipe for success. The production feels looser and more absorbing and electric, as they are joined by electric bassist Derrick Hodge bass, drummer Mark Guiliana and vocalist Gretchen Parlato, further enhancing Loueke's multicolored concepts.

Although the mood seems more groove-oriented on tracks such as "Ife" (the Yoruban word for love), the set exudes Loueke's immersive poeticism through lyrics sung in his native tongue and tantalizing harmonies. One of set's most captivating tracks is "Hope" co-written by Loueke and Glasper. Its inspiring spirit is highlighted by Glasper's expressive touch on piano and Rhodes, lovely vocal harmonies from Parlato, and Loueke pouring out an uplifting libation via tender spoken words.

The infectious rhythmic inventions of "Tribal Dance" and "Freedom Dance" are telling of the Hodge-Guiliana lineup, with electric bass providing the tactile funkiness while the drums percolate hot beats. Glasper's "Tribal Dance" is painted with his familiar circuitous harmonies, while Loueke's "Freedom Dance" is an infusion of high octane fuel, the guitarist laying down an effects-laden solo against its funky rhythm. Hodge (a member of Glasper's Experiment band) and Guiliana (having played with bassists Avishai Cohen and MeShell NdegeOcello) are a powerful rhythm section that brings flavors of hip hop and dub beats, as well as jazz into the mix.

The title, Heritage, references Loueke's collective roots, whose threads extend through many origins and destinations, as reflected in the track names. "Ouidah" speaks of the his mother's village which was also the center of the slave trade in Benin, whereas Loueke (who also lived in France) wrote the tender ballad "Chardon" (the French word for "thistle"), for a beautiful yet dangerous flower. Topping things off is Glasper's energizing "Bayyinah," a piece written for a departed family member. It's one of the tightest jams in the set, with some deft scissoring from Guiliana. On each of these tracks Loueke plays steel-stringed acoustic with astounding lyricism and touch.

From start to finish—and with a fresh perspective—Loueke's third release on Blue Note is the charm.