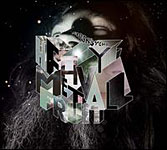 Together for two decades, indie/prog rock trio Motorpsycho has gradually built an audience outside its native Norway, though the group remains a better draw in Europe than in North America. That's a situation that, by all rights, should change with Heavy Metal Fruit, a combination of metal-tinged prog, space-rock jams, and passages of reckless abandon, all delivered through epic writing, thunderous grooves, and layered guitars.

Founding members Bent Sæther (bass) and Hans Magnus Ryan (guitar) are joined, once again, by drummer Kenneth Kapstad, back from 2008's Little Lucid Moments, the trio's first for the intrepid Rune Grammofon label. The formula—if it can be called that—remains: lengthy, episodic tracks rock hard and loud, but there's a surprising depth to the writing, largely from Sæther alone or in collaboration with Ryan. Sequenced to run together uninterrupted, the set ranges from the head-banging pulse of "Starhammer" to the up-tempo rocker "X-3 (Knuckleheads in Space) / The Getaway Special)," the second half of which drops into a slightly funky exchange between Ryan and guest trumpeter Mathias Eick—of The Door (ECM, 2008) and Jaga Jazzist fame—building to a dense climax propelled by Sæther's potent, bass chord-driven groove.

While instrumentals define Motorpsycho, its vocals are equally compelling. The subject matter may be straight from outer space (an ongoing theme), but while none of the three members of the group have what could be called exceptional voices, together in harmony they create a sound all their own. The thundering riff that drives "The Bomb-Proof Roll and Beyond (for Arnie Hassle)" sets up a round that's not unlike progressive rock bastion Yes, but only if it were far more guitar-heavy and with grounded rather than celestial voices. And the middle section—a combination of ethereal texture and relentless, feedback-driven maelstrom—takes some of early Pink Floyd's psychedelic excursions to the next logical step.

The trio also knows how to pace itself. "Close Your Eyes," which comes half-way through the hour-long set, is driven by guest keyboardist Kåre Chr. Vestrheim's piano, a calm before the emerging storm of "W.B.A.T.," which builds from nothing to pulsing, riff-driven funk that's a throwback to Deep Purple's In Rock (Warner Bros., 1970), though Ryan's tone is grungier than Ritchie Blackmore's ever was.

But it's the 20-minute, four-part "Gullible's Travels" suite that's Motorpsycho's greatest achievement to date. This isn't the first extended piece the group has tackled, but "Gullible" is certainly its most ambitious. From pounding grooves and delicate acoustics to an irregular-metered middle section where guitars and keys carefully build an intensely visual orchestration, viscerally resolving into a hauntingly melodic climax that dissolves into an atmospheric coda, this is Motorpsycho's definitive, classic epic.

With plenty of cross-over appeal between metal and prog heads, Heavy Metal Fruit is Motorpsycho's most fully realized album to date, a compelling blend of hard rock, space rock, prog rock, and the je ne sais quoi that's defined the group since the very beginning.