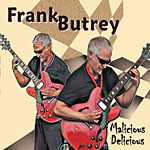 The versatile Frank Butrey lends a psychedelic rock-infused flavor to the jazz repertoire in Malicious Delicious. The Philadelphia-based guitarist displays his wares through these original compositions (some co-written), performed with some of his favorite musicians including members of bassist Warren Oree's Arpeggio Jazz Ensemble (Butrey is a working member), who flavor the tracks in various ways. Acknowledging the influence of rockers Jimi Hendrix and Carlos Santana, along with Chick Corea and Pat Martino from the jazz inner circles, Butrey whips up a series of intense and sometimes very personal statements that, as the title implies, shake things up and, at times, provide a rich taste of more sensitive playing.

While Butrey has all the virtuosity and resilience of a fine jazz guitarist, this is not an album for easy listening. The overall guitar sound is biting and sharp, at times becoming boisterous and obstreperous, echoing Pink Floyd and other groups from the psychedelic era. There are forays into various moods, from the distressing "Malicious Delicious Blues" to the laidback "Acoustic Afternoons" and everything in between.

Jazz guitarists will find Butrey's rich improvisational capabilities of great interest. He likes to play with possibilities and demonstrates rich motivic and chordal development. There is an ingenuity repeatedly occurring as he and his cohorts try on new "skins" in chameleon-like adaptations. After several listens, the head spins from exposure to the myriad musical changes that, in turn, evoke changes in the psyche. In that sense, the music is transformational, provoking changes in the sense of self much like a psychedelic drug.

This album will appeal to those who appreciate emotion-driven interpretations with a hard-rock accent and a touch of jazz fusion. Those seeking a straight-ahead fine arts guitar sound, however, had better look elsewhere.