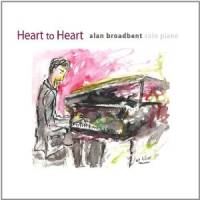 Pianist Alan Broadbent can't be accused of rushing to release his second solo piano album; Heart To Heart comes more than two decades after Broadbent initially took the solo plunge with Live At Maybeck Recital Hall, Volume 14 (Concord, 1991), but it was worth the wait.

While only Broadbent knows the exact reason for waiting so long to return to this format, it's safe to assume that it has something to do with his in-demand status in so many other musical arenas. Much of his work has been dedicated to the art of the trio, supportive sideman stints, and arranging jobs, leaving him precious little time to explore things on his own. Many people, in fact, aren't even aware of his pianistic prowess, knowing him only as the man who creates musical drapery for everybody from songbook kingpin Michael Feinstein to Natalie Cole to Sir Paul McCartney; those people are missing out. Broadbent's piano work—solo or otherwise—is pure poetry in motion, filled with sophisticated musical trappings that tickle the ear and fuel the imagination.

The title of this album is a bit of a misnomer, giving the impression that Broadbent may be taking an introspective journey; that proves false from the get-go. Flowery gestures and stereotypical romantic notions are not sine qua non for solo piano success in Broadbent's world. He's far more likely to embark on a rhapsodic thrill ride than a ruminative walk on this one, and that's a good thing. He sprints along, as might be expected, on "Cherokee"; visits waltz territory with "Now And Then"; and plunges his hands into the heart of darkness on a riveting take of Ornette Coleman's "Lonely Woman." A few numbers tend to be a tad more reflective than the rest, but none get bogged down in emotional indulgence; Broadbent is too good to fall into that trap.

Broadbent's bread and butter may be his arranging work, but his heart and soul have everything to do with his piano playing. Heart To Heart puts those thoughts in perspective for all to hear.

Hello My Lovely; Heart To Heart; Alone Together; Now And Then; Journey Home; Blue In Green; Love Is The Thing; Lonely Woman; Cherokee.