By Bruce Lindsay
November 1, 2010
Sign in to view read count 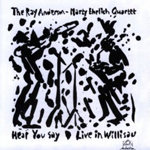 Trombonist Ray Anderson and reed player Marty Ehrlich first played together in 1978 as part of Anthony Braxton's band. Thirty-one years later, with extensive individual discographies, the pair finally formed a band of their own and recorded a concert at the 2009 Jazz Festival Willisau, in Switzerland. Hear You Say is this recording—a highly energetic, exciting, adventurous live performance.

The two leaders share writing credit—four tunes by Ehrlich and three from Anderson. Both men are inspired writers and performers; their compositions are terrifically inventive and both writing and playing are invested with humor. It's a winning combination.

Anderson's trombone sounds just like a trombone should—fruity, throaty, raucous and fun. His solo on "Portrait of Leroy Jenkins" epitomizes this raw and physical approach: his performance is strong, creative and emotional but never loses its groove. Ehrlich's "Hot Crab Pot," a bebop tune with a simple three-note riff as its center, finds Anderson delivering another rich, rasping, solo backed by a swinging bass from Brad Jone.

Ehrich's gentler, softer approach is the perfect complement to Anderson's sound. His clarinet playing, in particular, skips and dances gracefully, bringing a lightness and clarity to the quartet. Of course, he can also blow, matching Anderson's wildness on "Hot Crab Pot" and "The Lion's Tanz."

Anderson and Ehrich's richly inventive playing takes flight, thanks also to the rhythm playing of Jones and drummer Matt Wilson, the latter an experienced bandleader in his own right. The pair is solid and dependable throughout, but also plays with a style and flair that makes their own work eminently enjoyable on its own. Their playing under Anderson's growling, almost vocal, trombone on Ehrlich's "The Git Go" is simply spectacular, and the groove they deliver on Anderson's swinging and imaginative "Alligatory Rhumba" is irresistible.

The recording, by Schweitzer Radio DRS2, superbly captures the atmosphere of this live performance. The band's energy and enthusiasm and the audience's excited response give the event a real sense of occasion. Here You Say heralds the arrival of a terrific new quartet—it swings and grooves from start to finish.