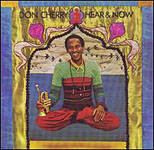 That multi-instrumentalist and world jazz pioneer Don Cherry was able to adopt such a beatific countenance for the cover shot of Hear And Now says much for the power of yoga, given the horrors that follow. The disc has now been reissued as part of Warner Jazz's Atlantic Masters series. But non-yogis should heed this warning: if you only acquire one Don Cherry album in your life, don't acquire this one.

Recorded in December 1976, Hear And Now was produced by drummer/keyboardist Narada Michael Walden, whose crimes against music—particularly at the height of the 1970s fusion era—are of a scale similar to those of pianist Bob James. The album is a truly gross example of Walden's schtick: bombastic cock-rock lead guitars, lumbering bass ostinatos, leaden drums, warbling background vocals, a faddish veneer of exotic mysticism and a sub-Wagnerian taste for dramatic shifts in dynamics. Walden himself is only heard on two tracks, but unfortunately one of them, the opening "Mahakali," features him on tympani. If Spinal Tap had been a jazz-funk band, and if it had recorded the jazz odyssey talked about in the movie, this is what it would have sounded like.

There are some great musicians on the album: Cherry, tenor saxophonist Michael Brecker (heard on one track), and drummer Tony Williams (heard on two) among them. Cherry solos with vigor on trumpet on most tracks, and twice on flute, but it's not enough to lift the proceedings, which are dominated by Walden's unfailingly predictable arrangements and the guitar histrionics of Stan Samole. There's one halfway decent track, the Latin-infused "Karmapa Chenno," with a great conga break from Sammy Figueroa and hot Cherry, but Samole's solo, this time attempting to pastiche Carlos Santana, drags it down again. All the tunes were written by Cherry, not that you'd notice.

Why do musicians of Don Cherry's caliber make albums like Hear And Now? To make some money, certainly; to have a laugh, maybe. Cherry probably didn't make much money on this one, so perhaps the cover shot says it all.