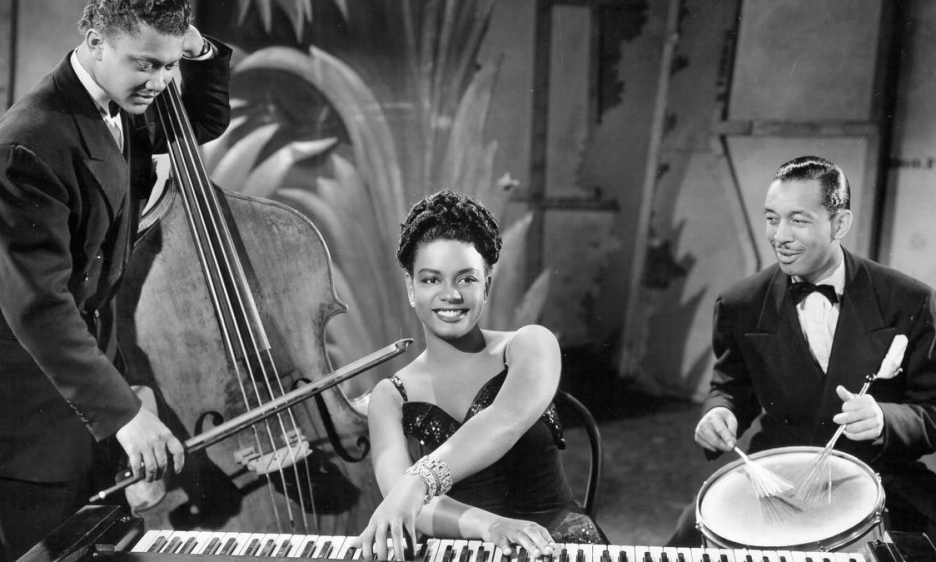 By Jakob Baekgaard
June 23, 2022
Sign in to view read count
Ahmad Jamal is often credited with creating a new spacious sound in jazz. He had a tingling sense of touch on the piano that let each note ring profoundly and famously inspired Miles Davis to explore the effects of silence and space. It was a sound equally admired and belittled as cocktail jazz because of its relaxed sound, perfect for the clubs, but it was more than light easy listening. It was a sophisticated kind of music that married classical and jazz into an intriguing expression. When Jamal's album Ahmad Jamal Plays (Parrot, 1955) was reissued in 1956 on what would be his future home, Argo Records, the title summed up the sound perfectly: Chamber Music of the New Jazz. Argo had cleverly identified a new sound and made it a selling point, but Jamal wasn't alone with his innovations in 1955.

The same year, and several months before Jamal, pianist and singer Hazel Scott mined the same territory with the ballad part (the A-side) of her album Relaxed Piano Moods. At that time, she was already an established name. In the early forties, she starred in five movies, including the Gershwin biopic Rhapsody in Blue and I Dood It, directed by Vincente Minelli. She insisted on getting roles that portrayed charismatic individuals and wasn't satisfied playing the stereotypical roles that were often offered to Black actors. She also stood up for the other actors. In the end, her fight for basic principles of dignity cost her a career in Hollywood, but music would continue to play an important role in her life as it had done since she was a child.

Hazel Dorothy Scott was born in Port of Spain, Trinidad, on June 11, 1920. Her mother, Alma, was a classically trained pianist and teacher and early on it became clear that her daughter was exceptionally talented. She discovered the piano at the age of three, showing an ability to play by ear, and when she moved to New York in 1924 with her mother and grandmother, new opportunities awaited. She enrolled in the prestigious Juilliard School of Music when she was only eight years old. Normally students had to be at least 16 years old, but an exception was made because of her talent.

Later, she became famous for her performances at the Café Society where legendary singer, Billie Holiday, specifically requested that Scott replace her when she had finished her own gigs at the venue. Scott became known for jazzing the classics, deconstructing familiar classical pieces, adding a solid dose of boogie-woogie to the rhythmically stiff classical repertoire. An early example of her fusion of jazz and classical music can be found on Swinging the Classics: Piano Solos in Swing Style with Drums (Decca, 1941). She also hosted her own radio show, and in 1950, she became the first Black artist with her own nationally syndicated television show.

All this is to say that when Hazel Scott recorded Relaxed Piano Moods in 1955, she had already been a star and things had started to turn. Her marriage with the civil rights activist and politician, Adam Clayton Powell, had dissolved, and she had been the victim of the damaging accusations of The House Committee on Un- American Activities that claimed she was a communist. Hazel Scott had always fought for justice, refusing to play for a segregated audience, but she wasn't tied to a political party. No matter the truth, the accusations alone had a negative impact on her job opportunities, and she moved to Paris to find a more friendly and open environment. 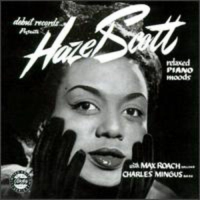 In spite of being estranged, she kept musical ties to the USA and Relaxed Piano Moods, released on bassist Charles Mingus' Debut Records, found her recording in a trio with Mingus and drummer Max Roach, two of the most significant modernists in jazz. Scott's own sound had also changed as author and Hazel Scott- biographer Karen Chilton remarks in the article "Hazel Scott's Lifetime of High Notes" from Smithsonian Magazine (2009): "Hazel's music softened during the Paris years, she played more serene tunes with less and less of her old boogie-woogie style."

The album was recorded by Rudy Van Gelder of Blue Note fame. He also penned the liner notes and immediately expressed his admiration:

"'The Great New Hazel Scott' might be a more appropriate title for the six tracks of this album. Her sorcery in spinning out the magical lure of the standard 'Like Someone in Love' surpasses even the technical virtuosity which originally earned her the title of "the wizard of the keyboard."

The key to understanding the transformed strength of Hazel Scott is exactly that she holds back on the pyrotechnical wizardry and instead focuses on the lyrical language of the piano. Scott was also an excellent singer, but here she sings through the keys. "Peace of Mind," her own composition, is an impressionistic landscape of sound that swings ever so softly and slowly with Max Roach's effectful use of brushes and the pointillistic bass-playing of Charles Mingus. Traces of Scott's classical training are found in the broad brushstrokes of the piano that never become too dramatic but heighten the tensions in the piece."

"Lament," written by trombonist J.J. Johnson, is another beautiful ballad where Scott digs deep into the melody and draws on the musical suspension of time whereas Duke Ellington's and Johnny Hodges' "The Jeep Is Jumping" picks up the tempo and translates swing into bop with fiery single lines and broken chords. The tempo is adjusted to middle tempo on another Hazel Scott original, "Git Up From There," which bounces along joyfully with restless vitality underlined by Scott's spontaneous exclamation: Yeah! Everything is wrapped up nicely with a standard.

The elegant execution of Gershwin's "A Foggy Day" exhibits a surplus of musicality without becoming showy. The lines are fast, clear, and swinging, and the fog is clearly lifting as Scott, Mingus and Roach navigate securely through the piece. Keeping the increased tempo of the B-side in mind, it would be more accurate to call the album half-relaxed piano moods, but the keyword that describes the whole album is economy. Although Scott is picking up the pace, she does it without embellishing too much, and the effects have a musical purpose. Even in high tempo, she is still interested in texture and timbre. 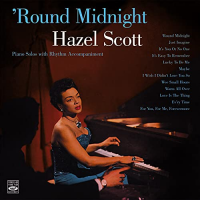 The pure lyrical sound of the piano was something she explored in greater depth on 'Round Midnight (Decca, 1957) which finds her skipping the burning bop aspect in favor of a pure ballad style. This transition is completed symbolically from the beginning when bop-maestro Thelonious Monk's classic ballad "'Round Midnight" is played with a clarity and lightness that let the melody shine like a classical lied. The melodic aspect of the record is also something that is highlighted in the unsigned liner notes:

"The sensitive side of Miss Scott reveals an uncanny ear for lovely and rare melodies, for her selection of songs for this collection strays somewhat from the traditional overplayed and too oft heard standards. It is refreshing to hear such lovely themes as the poignant Thelonious Monk's "'Round Midnight," the late Victor Young's beautiful "Love Is The Thing," Leonard Bernstein's sensitive "Lucky To Be Me" and Frank Loesser's "Warm All Over." Her readings of these and the other songs herein are faithful to the beauties inherent in their melodies, yet are tinged with modern jazz phrasing and tasteful improvisations."

Scott is accompanied superbly by bassist Sandy Block, drummer Jimmy Crawford and guitarist Everett Barksdale, but the shimmering melodies are the center of attention and not the musicians. This is where the link to Ahmad Jamal's chamber jazz is heard most clearly. The emphasis shifts from hard swing to the bell-like beauty of each note, perhaps best illustrated on the reading of "Ev'ry Time," written by Hugh Martin and Hal Blaine. Here Scott's piano almost sounds like a glockenspiel as she paints a dreamy and delicate musical landscape with subtle musical shifts. Silence and space play important parts in the music, as does restraint and resonance, and yet the music is dynamic and in constant development. There's also room for a bit of relaxed bluesy swing on Ira and George Gershwin's "Maybe" and the closer "For You, For Me, For Evermore," but there's no doubt where the emphasis is. This is a nocturnal romantic record that shows Scott as a master of moods and space. 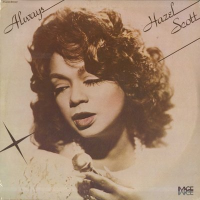 Scott seemed to be able to change with the times and yet be completely her own. Her records embrace classical music, boogie-woogie, bop, and romantic balladry, but the strangest mixture of sounds is undoubtedly the album Always (Image, 1979). At this point, Scott had returned to America, but her days of fame were over. It's tempting to see Always as an attempt to reposition Scott as a pop star. This is underlined by the cover that shows her with a microphone and indeed she is both singing and playing the piano. The record was produced by Sandy Sandoval, who favored a modern pop sound, which means that Hazel Scott has a go at disco on the opening track "Let Me Hold You." This strategy proves to be half-hearted on a record that is a strange postmodern amalgamation of old and new. It's not really a disco record and it's not a classic Hazel Scott album, but something in-between. There are highlights like Scott's rootsy rendition of Billy Joel's hit "Just the Way You Are" and "Do You Feel Alright?" is cooking with wailing saxophone and Scott swinging hard. But just as you think she is about to settle into her old bag, she delivers the discofied "Always." In the end, there is no doubt where her heart is, and the album closes with the bluesy ballad "No Greater Love" that wouldn't feel out of place on Relaxed Piano Moods.

It isn't surprising that Hazel Scott didn't reinvent herself as a disco star, even though she had the voice to do it. Jazz had been the love of her life and it was also jazz she returned to when she recorded Afterthoughts and After Hours in 1980. These two albums would be her last recorded works. After being diagnosed with pancreatic cancer, Hazel Scott passed away on October 2, 1981. She was a role model and musical pioneer who left behind a rich musical legacy in the space between swing and silence.