By Doug Collette
November 7, 2021
Sign in to view read count 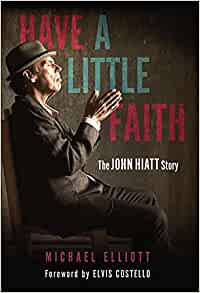 Reading Have A Little Faith, it becomes clear quite early on how deep and abiding is author Michael Elliott's passion for his subject, In fact, by the time The John Hiatt Story concludes, it's almost as if that devotion to his subject is simultaneously his greatest strength and greatest weakness.

Maintaining some measure of objectivity may well be the most formidable challenge any writer faces and Elliott does struggle sometimes to avoid being overly effusive. But he's certainly no fanboy: his knowledge of music in general and Hiatt's body of work in particular rescues him from any genuinely righteous accusations along those lines.

That said, this staff writer for No Depression might well have benefited from some more astute editing, either from himself and/or his publisher. Over repetition of some words (masterful and variations thereof) and misuse of others (poured for pored) does a disservice to his broad grasp of minutiae and willingness to research same (chart positions as well as reviews of records under discussion).

As does the lack of continuity that, in a couple cases, cause explanatory text to appear only on the second mention of a topic. Reference to the independent Southern label Malaco Records is one instance, while citation of the vinyl box set Only The Song Survives (New West, 2019) is another. Still, the insights that so often arise from Elliott's command of facts are too valuable for such relatively minor blemishes to seriously undermine his credibility, especially give how he rescues himself from such a clunky start to Have A Little Faith.

His own introduction is self-absorbed to a fault and belies his relatively thorough attention to detail elsewhere in the book. And Elvis Costello's foreword is an unctuous self-indulgence in name dropping. Given that double misstep as a beginning to to The John Hiatt Story, the rapid clip at which the main narrative proceeds is all the more reassuring, even if its anecdotal nature renders it more illuminating than penetrating.

Actually, as the (only) two-hundred forty pages proceed, it's nigh on a miracle Michael Elliott maintains such a steady pace. The chronological unfolding of the story, from Hiatt's early days as a bandleader in high school to his deserved status as something of a godfather of Americana music, too often threatens to bog down in monotony; as the writer proceeds from album to album and tour to tour, the sameness of the approach would be severely off-putting if the cast of characters were not so colorful.

Fortunately, segments of interviews with with bandmembers, friends and family comprise the bulk of the prose. And, oddly (or perhaps not), those intervals are more enlightening than those with Hiatt himself; unlike the candor of guitarist Sonny Landreth, long-time manager Ken Levitan and wife Nancy, the subject often demurs on offering much forthright retrospect, chalking it up to his self-admitted abuse of alcohol and drugs, not to mention abuse at the hands of a sibling who died early and tragically .

As a result, a cynic might state Michael Elliott actually succeeds despite himself with Have A Little Faith. But that jaundiced point of view doesn't assign sufficient value to how openly this writer communicates how he sees his own life mirrored in John Hiatt's. It's unfair to criticize the man who wrote this book for not being so skilled in the nuances of communication as the songwriter he so admires—that would be unreasonable—but he may go overboard in his praise of 1987's Bring The Family (A&M, 1987). Better perhaps that he more often offer comparisons of subsequent albums, like the splendid (superior?) The Eclipse Sessions (New West, 2018) to this undeniable watershed work.

It is, however, worth emphasizing as Elliott does with such admirable understatement, how many names like Bonnie Raitt and Rosanne Cash, had wide success with Hiatt's material before he did. And there's also plenty of reason to praise the way Elliott offers comparably memorable perceptions of the albums and the live performances. In fact, Have A Little Faith would benefit tremendously from more analysis of the individual entries in his subject's extended discography as well as his concerts (solo, with his various band and other collaborations would add flavor to the sometimes strained prose).

In the end, Michael Elliott leaves a reader hoping there are future editions of The John Hiatt Story. At least one sequel would allow him to not only polish the content here, but add more of greater variety, in direct proportion to the prolific nature of the musician/composer he reveres.