Jordan Dykstra - Koen Nutters: In Better Shape Than You Found Me

By John Eyles
November 7, 2021
Sign in to view read count 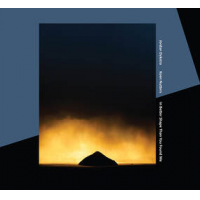 As is true of so much music released in 2021, Covid-19 and the lockdown played vital roles in the creation of In Better Shape Than You Found Me, the first album by the duo of American composer & violinist Jordan Dykstra and Dutch composer Koen Nutters. Having previously had an interest in one another's work, and hung out together in Amsterdam—where Nutters organised a concert of a Dykstra work—in early 2020, when Nutters was in NYC for a gig, Dykstra proposed that he and Nutters collaborate on a piece. The pandemic meant that collaboration involved the two sending material back and forth between them. At the time, Nutters had been working on a piano piece "with chords, scales and lots of long silences," and Dykstra on "a lot of ambient soundscapes using field recordings as the basis of their foundation." Inevitably, the back-and-forth exchanges meant that both these elements became crucial ingredients of the joint work entitled "In Better Shape Than You Found Me," the hour-long piece which comprises the full album of the same name.

For many listeners, perhaps the most important information about the piece is that its one-hour running time does not mean it becomes an ordeal or a survival course. Instead, it contains enough variety and detail to sound fresh and vibrant throughout. While there are sounds—of instruments and other things—which recur, that never becomes wearying, as they give a structure to the composition. Alongside frequent interjections from piano, one of the key elements that is repeated is a field recording of birds. Dykstra reports that he made the recording of night birds singing in Brooklyn; he found that because of the lack of cars or loud transport on the roads during lockdown, native animals were singing again and could be heard better. Yes, as this album demonstrates, every cloud has a silver lining...

Dykstra and Koens were so pleased with this jointly-composed piece that they retro-composed a score of it so that it could be performed as heard on this album. In August 2021, a quartet version of it was performed at KM28 in Berlin by Dykstra, Manuel Lima, Lucy Railton and Hannes Lingens, with performances in other cities being discussed. Yes, we have not heard the last of "In Better Shape Than You Found Me." This one looks set to run and run...

In Better Shape Than You Found Me.

Title: In Better Shape Than You Found Me | Year Released: 2021 | Record Label: Elsewhere