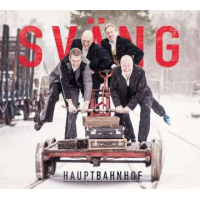 From the outset, Sväng's eighth album Hauptbahnhof evokes a bygone age of often gilded life, leisured strolls, and acoustic instrumentation. Or is it just the evocative sound of their four harmonicas that immediately conjures marching men, wartime truces and so forth? In any case this album of idiosyncratic tunes, and one song, does more than its best to show that four professionals with their combined harmonic range of over six octaves, can take the harmonica anywhere on the musical spectrum.

The first track 'Jampparaleele' sets the album in motion in a classic steam-driven style, a piece whose name itself suggests railroad journey in their company. As many of the 16 tunes here, it is based around a classic folk notion, this one a Romainian geamparale (a castanet based riff if I understand right) to which Eero Turkka, one of the three composers in this quartet, has composed a tune. The overall sound is rather reminiscent of another harmonica-led group, Hazmat Modine, except that Sväng's repertoire owes less to the blues and more to east European dance traditions, and in order to fully appreciate the humor of their work (the titles especially) requires a PhD in contemporary Finnish slang.

In fact this album is quite a retrospective product, including 12 pieces that can be considered favorites among their many followers in Europe and Japan, such 'Jampparaleele' and 'Svängtime Rag,' although mainly not released before. To these are added four new pieces, such as an adaption of John Williams' orchestral piece 'Hedwig's Theme' by Eero Grundström, and Jouko Kyhälä's 'Kua Kua Komi Kiki,' inspired by a repeated line of Averell Dalton in the Lucky Luke cartoon strip, "Cuando se come acqui?." Their humor is indeed multi-cultural.

As these titles suggest to the initiated, in general this music is quite light, frequently evocative of traditional folk or jazz melodies, another piece being 'I'm Gonna Meet My Mother in Glory,' as performed by Jaybird Coleman and Ollis Martin. During their 14 year career they have tackled a swathe of genres with their four-part harmonic approach, including an album of Sibelius' music and another including six Chopin pieces. So 72 minutes of incessantly instrumental harmonica music might seem 'challenging' and is nothing if not focused. But, like their live shows, Sväng vary the weight of their attack with a widely, if not wildly, varied selection of tunes and tempos, and an approach to music that is at the same time targeted and teasing.