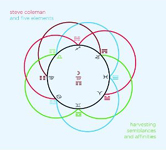 As the founder of the M-Base movement, alto saxophonist Steve Coleman has been at the forefront of advances in jazz composition for 25 years. Culled from traditions with roots in the diverse music of the African Diaspora, M-Base's intricate fusion of syncopated rhythms and polyphonic harmonies has provided a vivacious, forward-thinking alternative to staid conventions for over two decades.

A veteran scene leader and mentor, Coleman has aided the careers of peers like Geri Allen, Greg Osby and Cassandra Wilson, as well as nurturing the development of such heavyweight modernists as Vijay Iyer, Steve Lehman and Rudresh Mahanthappa. Coleman's seminal innovations are also manifest in the work of former students such as Ravi Coltrane and Jason Moran, yet for the past few years Coleman's own output has been relatively sparse.

A concept album inspired by the passage of time and seasonal renewal, Harvesting Semblances and Affinities is Coleman's first widely available domestic release in almost a decade, and a persuasive reminder of his visionary artistry. A philosophical polymath, Coleman transposes the cyclical progression of the seasons into a labyrinthine opus of tetrachord progressions, contrapuntal polyphony and shifting polyrhythms. Arranging these multi-layered compositions into a fluidly expansive suite, he circumvents preconceived notions of cerebral impenetrability with an accessible program that gracefully modulates from the primal ("Beba") to the sublime ("Clouds").

The album's ritualistic deportment is superbly executed by a stellar incarnation of Coleman's venerable Five Elements ensemble. Trumpeter Jonathan Finlayson, trombonist Tim Albright and vocalist Jen Shyu are veterans of this flagship unit, while bassist Thomas Morgan and drummer Tyshawn Sorey are ubiquitous rhythm partners in the New York scene. Of all the sidemen, Sorey has garnered the most acclaim as a budding composer, though his skills as an improviser remain his primary talent. Unleashing pneumatic maelstroms of unbridled virtuosity on the session's funkiest cuts, he reveals a longstanding debt to M-Base with some of his best playing on record.

Coalescing into a kaleidoscopic array of timbres, Shyu's mellifluous vocalese provides constant counterpoint to the thorny staccato interplay of the three horn frontline. Her wordless vocals, culled from folk traditions around the globe, balance the sextet's urban tonality with a humanistic air. On a lush interpretation of Danish composer Per Norgard's "Flos Ut Rosa Floruit," she transcends concepts of Eastern and Western harmony with her euphonious delivery of the Latin text, imbuing the album's sole cover with a universal spirituality.

Coleman allows his sidemen a modicum of solo space, contributing a few stunning intervallic alto runs himself. The project's focus is dynamic group interplay however, and each statement is concise and thematically related to the written material—far removed from the informality of a blowing session. Filled with cantilevered rhythms, intertwining melodies and oblique harmonies, Harvesting Semblances and Affinities is one of the strongest albums of Coleman's career and compelling proof of his continued importance in the development of contemporary jazz.