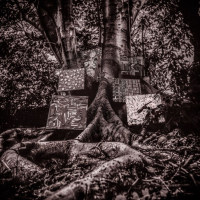 Being lauded as the "saviour of jazz" would weigh heavy on the shoulders of any young artist, even one so confident as to release a 170 minute treble CD as their 2015 debut. Yet Kamasi Washington pulled it off on the appropriately titled The Epic, with its ambitious, eclectic subject matter and surface similarities to spiritual jazz greats like Pharoah Sanders. Those that stuck with it were rewarded with an album that seemed to inhabit its own niche or world, attracting new listeners to the music and raising the possibility of crossovers with artists as eclectic as Flying Lotus, Thundercat and Kendrick Lamar.

Two years have passed and we now have this rather more modest 30 minute follow up Harmony of Difference. Springing from an initial commission for the Whitney Museum of Art Biennial celebration, Washington has described the pieces as an exercise in counterpoint or "the art of balancing similarity and difference to create harmony between separate melodies." Other definitions of counterpoint also emphasise that the separate melodies need to be harmonically interdependent yet "independent in rhythm and contour." While I suspect that for those of us who are not music students the full implications of these statements might not be apparent, there are clear philosophical parallels with the sort of plea for racial harmony and celebration of difference that has become more and more necessary in recent years. In the sleeve notes Washington puts it in terms of the hope ..."that witnessing the beautiful harmony created by merging different musical melodies will help people realize the beauty in our own differences."

So what of the music? Theoretically consisting of 6 tracks, the first five short pieces segue into each other and the final "Truth" runs for some thirteen minutes. Opener "Desire" sounds like Willie Mitchell's Hi records house band that played on those wonderful records by the likes of Al Green and Ann Peebles in the early 1970s, and segues into the stunning "Humility." Starting with an incendiary, quick fire horn riff it feels more like a call to arms from Charles Mingus than anything humble -and with a running time of 2 minutes 46 seconds is gone far too quickly. The pace drops a touch with the mellower, more reflective, "Knowledge" that features great trumpet work from Dontae Winslow and a thoughtful solo from Washington himself. "Perspective" that follows starts off like a spiritual jazz piece, before shifting into a walking rhythm with a loping Crusaders-type beat so convincing the appearance of Randy Crawford at the microphone at times feels imminent. Last of the short pieces is "Integrity" a well-judged, engaging, samba rhythm with a descending horn melody that does not outstay its welcome.

"Truth" at 13 minutes long is perhaps the closest in sound to the debut album here and the best demonstration of Washington's intentions regarding counterpoint. The piece builds layer upon instrumental layer both around and developing from a relatively simple melody showing how the related but different tones can co-exist. The heavenly choirs from "The Epic" return presumably to signify faith, before the wave of sound recedes to gradually build up again after Washington has solo-ed. The instrumentation is also significantly beefed up on this piece, including Thundercat on bass, 4 violins, 2 violas and 2 cellos. It adds weight and complexity to the composition and already feels like a spiritual jazz classic in the making.

It would be far too easy to dismiss this 30 minute collection as inferior to the lengthier debut, but for those who prefer their artistic statements on the concise side, it may yet prove to be the better summation of Washington's substantial talents. There is a breadth of thoughtful, well played and considered music here that in many ways surpasses that more celebrated collection. Ignore the hype about a 'saviour of jazz,' my guess is that most readers of this site will not feel that jazz needed saving, but don't ignore Washington's achievements here. This is a fine album that even judged by the highest possible standards must rank among the year's best, and as such is an unreserved recommendation.