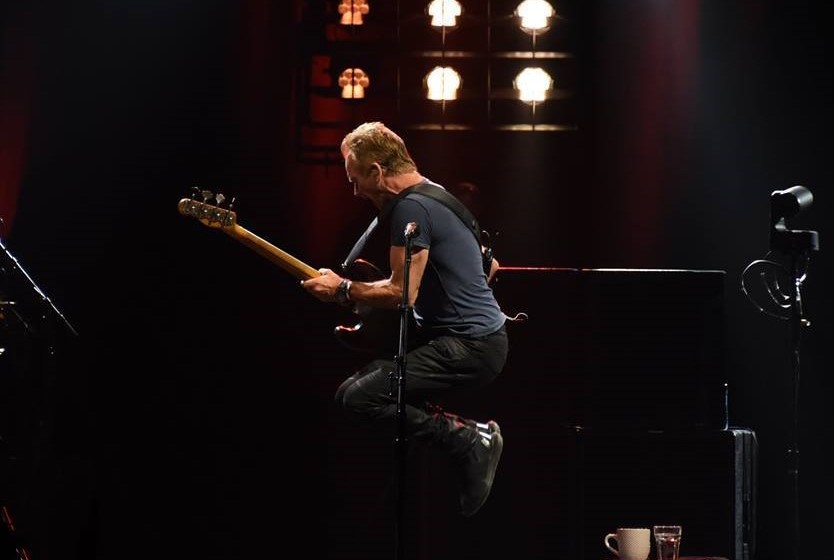 The "Boris Trajkovski" sports hall in Skopje witnessed a show as great as any in his illustrious career from the legendary musician and songwriter. Nevertheless, the attentive, full-capacity crowd who turned out witnessed something special. The gig in Skopje was next to last in Sting's world tour which began back in February. There was a tension building in the air with a genuine sense of ceremony as the audience waited for the show to start. When Sting skipped onto the stage with his son Joe Sumner, the audience rose in ovation before he had sung a note.

But the whole show began rather quietly. The first part of the concert began with a father and son duet with Sting singing a duet with the younger Sumner on the poignant and folkish "Heading South on the Great North Road" from the last record. They were helped by Dominic Miller's melodic guitar lines. In a matter of seconds, Sting and his son reached out and connected with the audience and formed a bond of trust. But as soon as the song ended, the younger Sumner took over with his guitar and began performing his own songs as a warm-up solo act. His songs were nice pop songs that are in a different vein than his dads but nevertheless, he has his vocal chords when he sings at the top of his voice. It was endearing but it raised the expectation more for what was to come.

As soon as the full band showed up on stage it launched into a series of songs from various corners of Sting's career starting with The Police's blasting "Synchronicity II" that was followed by gems such as "If I Ever Lose My Faith," "Spirits in a Material World," "Englishman in New York," "Every Little Thing She Does is Magic." Sting was on blistering form, delivering a dazzling and engaging performance that was as friendly and warm. With a voice, looks, and melodies untouched by time, he was unleashing the full charge of his extraordinary talent and songs to a couple of thousand fortunate fans. This first batch of songs raised the anticipation and expectation and literally hit the audience with roaring committed versions of songs people wanted to hear. Somehow he transformed this stark and almost alienated environment into a place of warmth, community, and transcendence.

And the focus really was on the music and performance. There was little in the way of arty visuals and side video screens, just the band clearly enjoying what they are doing. The standard of musicianship was sensational and evidently, the band's line-up was kind of a family affair. It was a mixture of veteran musicians and some of their sons playing with joyful exuberance. On one side was guitarist Dominic Miller, a virtuoso electric guitarist with a fluid touch, colorful approach and daring imagination and he shared guitar duties with his son Rufus Miller who shouldered demanding rhythm guitar and backing vocal duties on the other side of the stage. But the person who really propelled the show and held it in the palm of its hands was drummer Josh Freese. Freese is a virtuosic and eminently tasteful drummer whose reach ran far and wide. He was a constant source of wonderment all through the evening as he exhibited an otherworldly way of playing Sting's songs. Having seen Sting on other occasions and knowing his history with drummers it is obvious that his criterion for choice of drummers is impossibly high. But it was the bassist with his battered instrument who led the show with his expressive voice. Even at the end of a long tour with a demanding schedule, Sting sang like a champion.

To hear a packed hall singing his gorgeous, sentimental and beautiful string of ballads like "Mad About You," "Fields of Gold" and "Shape of my Heart" with all their hearts is to be reminded over and over again of how music can effortlessly touch hearts and minds that most art forms often struggle to reach. With the first notes of each of these songs, there was an eruption of joy and an exclamation as people recognized the opening melodies and sang them loudly with Sting.

There's almost no point in getting into specific high points as the set was crammed with monster hits, the kind of songs that have become the fabric of people's lives, and the audience greeted each chorus with vigorous, singalong pleasure. As a singer of one of the '80s most revered bands and then as a solo artist, Sting is the undisputed songsmiths of our time. Both his watershed album "Nothing Like the Sun" and his band The Police are celebrating their anniversaries this year respectively. The set had plenty of other Police songs as well like "So Lonely," "Message in a Bottle," "Walking on the Moon" and "Roxanne" (for which there was a volcanic reaction to and which ended the regular part of the concert) and they were mixed with hits like "She's Too Good For Me" and "Desert Rose." And it was mid-set that he began playing some songs from the last album like the punkish "Petrolhead" or "50.000" that was devoted to recently deceased rock stars like David Bowie or Prince. Hence it had Joe Sumner singing Bowie's iconic "Ashes to Ashes" as an intro into "50.000."

During the first encore, they performed two Police classics "Next to You" and "Every Breath You Take" along with the Police styled "I Can't Stop Thinking About You." But it was the second encore that made all the difference with "Fragile," a song about senseless violence that had people singing and was very much suited for the outside political climate this show occurred in. It was one world when the people entered the concert and it was a completely different one outside when it was all over. It was as if some sort of psychological load was gone. And Sting and his band were taken with the audience's reaction and him promising he will return again. He demonstrated his affection for the people in attendance and for his art, by playing a show of rich and joyous music where he and his band seemed to be having every bit of fun as much as the audience. It was uplifting and it contributed to a sense of the music being alive to the moment.