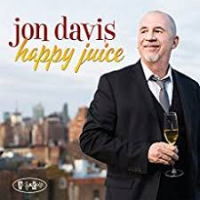 Everyone has their own version of happy juice. For some, it's the drink; for others, it's literature; for many, it's film; and for a certain breed, it's jazz, that most potent and unpredictable of aural intoxicants. It's the people that fall into that last group who are most likely to quickly uncork this one and take glee in polishing it off once and again.

As pianist Jon Davis sees it, some of the most significant pianistic vintners of all time are those who thrived during the '60s, a period he refers to as the "Golden Age of modern jazz piano." Herbie Hancock, Chick Corea, McCoy Tyner, Bill Evans, and Keith Jarrett comprise his list of the holy five from that era, and he salutes them all on his fourth piano trio date on the Posi-Tone label. But rather than simply pay homage through an all-covers album, Davis superimposes his own voice over their worlds, covering one song penned by each of those giants, and flips the script, using the influence of those piano pioneers as the seeds of inspiration for five originals.

Sequencing these songs in a pattern (i.e. pairing dedicatory originals and covers connected to the same artist) might seem like the logical way to construct an album like this, but that would've been too predictable. Instead, there's a beautiful mixture at play. Davis and company swing into the picture with the title track, an original taking blue cues from Hancock's nascent days, and quickly shift gears to a Tyner-esque vehicle that completely captures the harmonic and rhythmic essence of the honoree. Then it's off to "The Two Lonely People," a long-form Bill Evans masterpiece; "As We Know," an original in five which finds Davis channeling Jarrett's melodic strokes and connecting on a subatomic level with trio mates Boris Kozlov and Mark Ferber; "Tones For Joan's Bones," bringing the Latin lilt to the fore in this familiar Corea composition; and "Bred On Red," a piece that connects the dots between Evans and Red Garland while giving Davis a chance to peak beneath the surface of his own making.

The album's high point comes with Hancock's "Speak Like A Child"—an elegant, probing, and groove-friendly appraisal of all that's right and good in that legend's music—but there's no low point to speak of. Nothing falls short of impressing in some large and/or small way(s) here. The six songs that precede "Speak Like A Child" are all painted into memories, and the three that follow it—a swaying take on Tyner's "Search For Peace" in seven, a "Mostly Minor" built on a Corea-type mixture of expected and unexpected harmonic developments, and a performance of Jarrett's "Rainbow" that's graceful and invigorating—are first-rate. This album, once again, reminds us that Jon Davis remains one of the most important voices in the Posi-Tone stable and one of the most underappreciated pianists out there.