By CHRIS MOSEY
November 4, 2011
Sign in to view read count 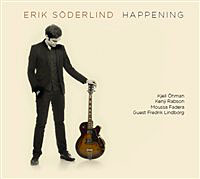 The sounds on Happening hark back nearly two decades before its creator, Swedish guitarist Erik Söderlind was born—in 1981. They stem from the mid-1960s, when Jimmy Smith revolutionized the way the Hammond B3 electric organ was played and created a new genre of hard bop featuring the Hammond with guitar as second instrument.

The jazz guitarists who played with Smith included Wes Montgomery, Kenny Burrell, George Benson and Grant Green, all of whom have influenced Söderlind. The trouble back then was that even such giants tended to get swamped by the torrent of sound emanating from the organist Miles Davis famously called "the eighth wonder of the world."

Here the boot is on the other foot: Söderlind's guitar is the principal instrument, underpinned by Kjell Öhman on the Hammond B3. But being Swedish, this is very much a joint effort, with none of the commercial pressures of that time when "the incredible Mr. Smith" was being promoted as a major new star by Blue Note.

With their debut album, Twist For Jimmy Smith (Prophone, 2009), Söderlind andÖhman were at pains—as the title indicates—to acknowledge their roots. That one featured mainly standards; here, Söderlind is more confident, playing seven of his own compositions.

When he won his homeland's prestigious Alice Babs prize in 2010, the judges hailed him as "a superb soloist and improviser" and praised his knowledge of jazz history. This he puts to good use here by resurrecting "My One And Only Love," written in 1952 by saxophonist Guy Wood, from Manchester, England. Along with Söderlind's own lilting ballad, "Grandmother's Dream," it's a standout track.

He and Öhman start to do some interesting work on harmonicist Toots Thielemans' "Song For My Lady," but are cut short, with the track running to only 1:56. They also dust off Horace Silver's "Sister Sadie," which features some assured solo work by both Öhman and guest tenor saxophonist Fredrik Lindborg, of The Stockholm Swing All Stars. Lindborg also contributes to "Syster Ysta," a hard bop workout penned by Söderlind.

The closer, "Alicia," another original, is a meditative solo with Söderlind trading his Ibanez AG for a classical guitar. It makes a pleasant break from the more frenetic Jimmy Smith tradition.