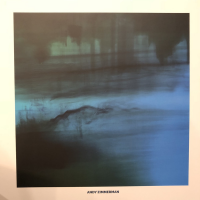 Saxophonist Andy Zimmerman is not a household name. The native Chicagoan has been composing, performing, and teaching music for more than two decades. In part, he comes to the subscription-based vinyl label Newvelle by virtue of a long association with the label's co-founder Elan Mehler, himself an accomplished jazz pianist. Mehler and Zimmerman played together at New York University, toured in Europe and recorded on Mehler's debut album. Much of Zimmerman's recent work has been as a musical accompanist to his author/storyteller father, Jack.

On Zimmerman's debut as leader, Half Light, the group is outstanding. After forty recordings as a leader, and with top-tier artists from Bill Frisell to Tom Waits, Dave Douglas needs no introduction. Kevin Hays deserves far more recognition than he has received to date. Having been recruited by Sonny Rollins back in 1995, Hays has gone on to record twenty albums as a leader/co-leader, including duo recordings with Brad Mehldau, and with Lionel Loueke on an earlier Newvelle release, Hope (2017). Bassist Matt Penman has appeared on close to three-dozen albums, working with Joshua Redman, Chris Cheek, Nils Wogram and the SF Jazz Collective, to name just a few.

Zimmerman wrote seven of the eleven tracks on Half Light and, while his approach is often low-key, there is a great deal of nuanced variability on the program. Hermeto Pascoal's "Montreux" is only slightly less bucolic than the flautist's original, and here with a touch of Eastern European flavor. "Sunset and the Mockingbird" is a movement from "The Queen's Suite" by Duke Ellington. Although the song was not originally a blues tune (but with a bluesy sound) Zimmerman emphasizes those qualities in his stunning version of it.

On his own compositions, Zimmerman floats from more complex and heavier qualities for slower tempos, to clear and more agile timbres for the faster ones. In the first case—as on "Golden Hours"—Zimmerman's saxophone, in combination with Douglas' muted trumpet, creates an effect that is dream-like and mesmerizing. The drummer-less quartet benefits from Penman, who keeps things in sync, subtly adding his accents and accompaniments to advance the music, even as the rest of the group trades-off in developing the music. Half Light is beautifully recorded and Zimmerman's strikingly-original compositions deserve to be heard.

Side A: Half Light; Clearing; Orr Springs Road; Montreux; The Bay Area; Two Sapphires. Side B: Crossing Iowa; Bess You Is My Woman Now; Lena’s Dance; Sunset and the Mockingbird; Golden Hours.