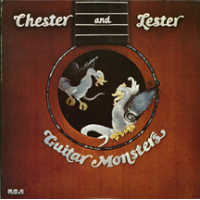 The seventies were bountiful years for guitar fans. Looking now at Guitar Player magazines of the period, it's almost dizzying to see how many veteran guitarists were doing some of their most interesting and liberated work. Bop stalwarts, blues greats (often obscure), and notable country pickers were all well-represented on vinyl throughout the decade, on a variety of labels.

Chet Atkins, whose easy listening country guitar records (all on RCA) were too often tasteful to a fault, came out of his shell a little more than usual in that decade, cutting great duet records each with thumbpicking idol Merle Travis and the brilliantly pyrotechnical Jerry Reed. But his most commercially successful pairing was with Les Paul, the Thomas Edison of electric guitar, whose fifties hits were landmark masterpieces both of recording technique and guitar arrangement. Their 1976 Chester & Lester (RCA Nashville/Legacy) was a sloppy, rambling tiptoe through a set of standards replete with studio chatter. It got by on its considerable charm, and won a Grammy (Best Country Instrumental Performance), despite there not being anything on it that was country music. Its success warranted a followup, and Guitar Monsters was it.

Fortunately, it includes less chatter, and the performances are more focussed. Atkins and Paul are quite a study in opposites. Atkins' neat, orderly thumbpicking collides happily with Paul's gregarious, even joyously vulgar soloing. Where Paul is not afraid to be sloppy, Atkins is pristine at every turn, even as he takes a few single note soloing turns that—for him—are unusually extroverted, even showy. From the first note, it's evident that these two men love each others' playing and take real joy in the back-and-forth.

The tunes are, as on their first recording together, all standards, save for two needless comedy numbers. Opening with "Limehouse Blues" (with Atkins doing some of his finest playing), we immediately are clued into Monsters' intent: a bunch of standards as lighthearted blowing vehicles for two complementary but highly contrasting guitar icons. Things stay mostly mid-tempo, although there's a straight ballad reading of "Over The Rainbow" that spotlights some gorgeous chordal work from Atkins. Special mention should be made of bassist Joe Osborne, whose playing throughout is understated and deep in the pocket.

(Chris Morris' liner notes are breezy and very smart, perfect to the music they describe.)

This isn't adventurous the way Coltrane At Birdland is adventurous, but it's such an enjoyable disc, one whose best moments are hard to resist. For guitar mavens, it's a joyous truffle.

Limehouse Blues; I Want to Be Happy; Over the Rainbow; Meditation; Lazy River; I’m Your Greatest Fan; It Don’t Mean a Thing (If It Ain’t Got That Swing); I Surrender Dear; Brazil; Give My Love to Nell; Hot Toddy