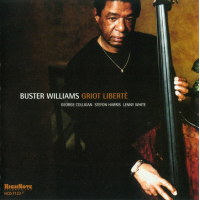 The instrumental lineup may mimic the Modern Jazz Quartet and, to be sure, Buster Williams' choice of vibes as the other front-line instrument was so that he could similarly "express a certain softness in [the] music." But that's where the comparison ends. Griot Libertè may also swing on the light side like MJQ, but the musical choices are far more weighty.

Opening with the modal workout "Nomads," Williams is quick to establish his dark and meaty tone, placed high in the mix yet surprisingly never overpowering; while Williams is willing and capable of using his instrument to define the groove along with drummer Lenny White, whose cymbal-centric approach contributes to the overall grace of the recording, he is clearly an equal partner in the proceedings.

Williams' charts are deceptive. "Related to One" is a blues-based tune, but by being in two keys with an eight-bar section by way of introduction, the result is a more challenging piece navigated effortlessly by vibraphonist Stefon Harris, whose talent seems to be growing in leaps and bounds, and pianist George Colligan, who is certainly no stranger to more complex composition.

The revelation of the recording is White, whose understated and elegant performance demonstrates a versatility that those familiar with his more fusion- and funk-oriented work might be surprised to hear. While he works the kit, his emphasis is on light cymbal work to define the time, and that, along with the more ethereal quality of Harris' vibes, are in direct contrast to Williams more visceral sound. It is, in fact, the juxtaposition of light and dark, gentle and forceful that gives the record its definition.

Williams demonstrates his ability to construct a compelling solo on his variation on "Concierto de Aranjuez." His piccolo bass work is lyrical and reverent, while at the same time bringing new meaning to this often-covered piece.

While the rhythmic emphasis is lighter, "Joined at the Hip" demonstrates that this band can swing hard without sacrificing any of its subtlety. The only odd thing, and in fact a surprising choice with a recording that has been impeccably recorded by master engineer Rudy Van Gelder, is the heavy use of reverb and gating on the drums during White's solo. For a recording that has such an organic feel, such obvious processing feels out of place.

Still, it's a minor quibble for a record that demonstrates how two seemingly dissimilar approaches can be brought together to create a unified whole. With White and Harris representing air, and Williams and Colligan grounding the sound firmly in earth, Griot Libertè is a project whose ultimate success should not be surprising; Williams has, over the course of forty years, demonstrated a remarkable natural sense of construction and an unfailingly refined musical instinct that makes every project well worth investigating.

Visit Buster Williams on the web.

Nomads; Related to One; The Triumphant Dance of the Butterfly; The Wind of an Immortal Soul; Every Time We Say Goodbye; Joined at the Hip; Concierto de Aranjuez; After the Ninth Wave.