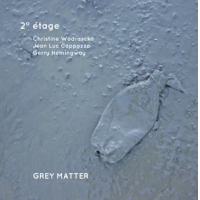 Impromptu meetings between improvisers hailing from diverse backgrounds are by now a commonplace event. But it's less usual is for the resultant grouping to take on a collective name, the surnames or initials normally sufficing for commoditization. For a group to perform under a moniker implies both a sense of purpose and a strong shared identity, and perhaps signals an intent to continue as an entity. 2o étage, as they call themselves, certainly matches up to the first two parameters, although its persistence remains to be seen. The unit is one of several to stem from drummer Gerry Hemingway's move to Switzerland, completed by the French pair of trumpeter Jean Luc Cappozzo and pianist Christine Wodrascka.

Although each member indulges in the pleasure of pure sound, they don't stay wedded to abstraction throughout. Strangely it is Wodrascka rather than Hemingway who often supplies the repeated motifs which sometimes anchor the explorations. Especially as she otherwise resides at the adventurous end of the pianistic spectrum, making full use of all the possibilities inherent in her instrument's physical framework, like her compatriot Eve Risser, and Rodrigo Pinheiro of the Portuguese RED Trio. Instead Hemingway concentrates on timbre rather than rhythm, while Cappozzo's trumpet often furnishes the garnish, ranging from breathy stutters through whirring drones to sounding almost boppish.

Together they ply a fine line in unpredictable interplay over the eight cuts on this live recording from 2012. Tension builds throughout the opening "Echappée belle" as Wodrascka lays down a rolling vamp (although vamp doesn't quite describe the rumbling thunder resolving to a definite note which she reiterates) over which Cappozzo's muted trumpet executes buzzing acrobatics. Later on "The sheriff arrives" drums and piano combine (as they often do) in an out of kilter lurch, against which the brassman pitches declamatory fanfares recalling Wadada Leo Smith in their insistence. Humor emerges too, particularly on the witty closing "Tanz Ende" where Cappozzo's squeaky toy sonorities answer and comment on a call and response between drums and piano, which finally breaks into a spontaneous circus march. Not how you would expect an improv album to end, but indicative of wit and invention to savor.