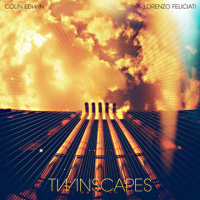 From the bottom up, Twinscapes is a long time coming, and not just for bass players. Sonically, this 11-track suite plays on your ears and mind in ways that can defy gravity, combining soft audial touches to go along with earthy funk, the residue left a kind of smoke that lingers but filters, inevitably it seems, upwards.

Twinscapes really is a kind of novel treatment of the electric bass, not that this sort of thing hasn't been done before. Think Bill Laswell, for starters. And, of course, the acoustic bass also has its masters in altogether spare environs. Think Dave Holland. But what Aussie rocker Colin Edwin (Porcupine Tree, Metallic Taste of Blood) and Italy's Lorenzo Feliciati (Naked Truth, Berserk!) have accomplished with this release is a dirty mix that's not exactly in your face, not necessarily danceable (although some of it comes close), a melding of hip-hoppy type influences, atmospherics reminiscent of a more raucous Brian Eno, most of it very melodic.

On board to provide some of that messy dirt on selected cuts, which furthers the remoteness from a clean-and-spare outing, are trumpeter Nils Petter Molvaer, Andi Pupato on "various percussions and Metallics," saxophonist David Jackson and drummer Roberto Gualdi on two tracks. Add on Laswell doing his "mix translation" thing, and you've got a lot to chew on, surmise, drift along with, get started with.

For the record, Edwin is on with fretless and fretted basses, ebow, rhythm programming, SuperEgo. While Feliciati is likewise on fretless and fretted basses, keyboards, guitar and Space Station. No matter, it's a bass-guitar outing, at bottom, so to speak. And experimental, in the best sense of the word. Which means not everything works. But that's never the point, is it?

"Shaken" begins this all-original program. A combination of musical- floatation devices and plunky Ventures-like guitar, its simple, hummable structure suggests play, even as the layers are added on, and the rude bass line refrain is like a finger in your eye, or ear. It's medium-tempo funk, complicatedly simple, with interlocking parts. And that seems to be the method here: simple, bass-ic, but strewn with off-ramps. Feliciati's "Alice" (written for his daughter) accents Edwin's idea of the bass "playing melodies," "and so forth." Yet another simple bass line (wise choice), its slow-moving progression invokes the spirit of Jaco Pastorius, the bassists' or bassist's sweet singing lines what everything hinges on. "Dreamland" continues the slow, grinding funk, this time with more sonic touches that can dance between both sides of your head; this is not head- banging music but it carries a certain uneasiness that may have you leaning forward, like when the echoey keyboard refrain enters roughly midway through the tune, followed by some subtly serious plucking. Each tune sits nicely next to the one that follows, nicely in the sense that there are no ruptures, no sudden outbreaks that tear at the fabric of the overall compassing of Twinscapes. Still, the underlying (as in bass) threat lingers, as with Jackson's sax squeals like a cry for mercy or release on "I-Dea," or the jumpy lifts offered by the very poppy almost dopey, definitely radio-friendly and oddly titled "Conspiracy." Best ambient moments: Over two cuts, "Sparse" and the developing "Yugen," we hear Laswell's wizardry touches more on display and a whole lot of bass-guitar slinkiness, Molvaer's trumpet weaving in and out, Pupato's deft percussives a brief, resilient edge to the latter. Best dance tune: "Perfect Tune," its driving funk, plucky bass lines and combination of studio shenanigans a kind of apex for Twinscapes. And "Solos," while invoking some of the broad gestures of '80s instrumental rock and their use of reverb and elongated backbeats, seems a fitting closer, even as it highlights the two bassists floating over other instruments. Gradual, like walking through water.

A bass guitar-driven outing ... how can that be anything but aural wallpaper? If after listening to Twinscapes, you haven't found your booty shaking just a little bit, your sense of being moved along by some catchy, if ethereal, melodies, not to mention delectable atmospherics, your head maybe refreshingly reimagining what the hell that bass guitar (or two) can do, you must be distracted, restless beyond recall, incapable of receiving. —John Ephland