By JOHN KELMAN
January 5, 2010
Sign in to view read count 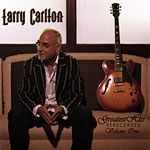 Since emerging as a ubiquitous session ace—his sweet tone and lyrical bent creating some of the 1970s' most definitive guitar solos for artists including The Crusaders, Steely Dan and Joni Mitchell—Larry Carlton has combined unerring melodic instincts and stunning harmonic knowledge into a discography as accessible as it is deep. For some, he's veered too close to the border of smooth jazz—crossing over, even—but get past the easygoing rhythms and changes, and there's far more than meets the eye. Not that any of this should matter; Carlton's always had chops to spare, but unlike many of his contemporaries from the day he's never placed style over substance. Along with Robben Ford—another guitarist accused of being "too light," and with whom Carlton collaborated on the incendiary Live in Tokyo (335 Records, 2007)—Carlton shares the title of "tastiest guitarist in jazz," and Greatest Hits Rerecorded Volume One is the perfect starting point to understand why.

Revisiting some of his more popular songs, Carlton brings bassist Travis Carlton (his son) and keyboardist Jeff Babko back from Live in Tokyo, fleshing things out to a quintet with über-drummer Vinnie Colaiuta and saxophonist Paul Cerra. The music ranges from the undeniably poppy "Smiles and Smiles to Go" and bluesy "High Steppin'"—both from one of his bigger sellers, Alone/But Never Alone (MCA, 1986), where Carlton put down his Gibson ES335 hollowbody electric in favor of acoustic guitar—to his equally pop-centric but more change-heavy signature tune, "Room 335," from Larry Carlton (Warner Bros., 1978), and the slightly grittier, more forcefully grooving "All in Good Time," from On Solid Ground (MCA, 1989).

But it's not all about light rhythms and pop-song accessibility. Carlton has, over the years, occasionally returned to the harder-edged, blues and rock-centric fusion that's been just as much a part of who he is, notably on albums like Sapphire Blue (Bluebird, 2004) and Fire Wire (Bluebird, 2006). Curiously, nothing is included from either of these fine discs, but Carlton does rework two powerful tracks from Renegade Gentleman (GRP, 1993), his rootsy collaboration with Nashville session ace, harmonicist Terry McMillan. Carlton may substitute saxophone for harmonica on the rocky "RCM" and fiery "Red Hot Poker," but the grit and grease remains fully intact.

Whether on the easy-on-the-ears ballad of "Hello Tomorrow" or equally laidback "Terry T."—Carlton's tribute to keyboardist Terry Trotter, who played with the guitarist from the late-1970s through to the end of the 1980s—Carlton's ability to build sophisticated yet instantly memorable solos filled with lyrical invention is as uncanny as his immediately recognizable combination of singing, overdriven tone with evocative bends and searing runs. Compelling from start to finish, Greatest Hits Rerecorded Volume One doesn't necessarily bring a whole lot new to the table, but it does collect some of Carlton's more memorable tunes together. That the majority of these songs feel familiar without having heard the original albums speaks to Carlton's ubiquity, and his soloing throughout serves as a lesson in taste to those who operate under the mistaken impression that it's chops alone that make a guitarist great.