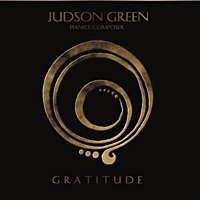 It's fairly safe to say that Gratitude, recorded in 2017, is pianist Judson Green's last album, as he died in August 2020 at age sixty-eight. It's even safer to say that Green, who released half a dozen recordings under his own name, played jazz piano solely for love of the music, as he didn't need to do that to make a living. For almost twenty years Green had a pretty decent day gig as president of Walt Disney World in Orlando, Florida, and later, Walt Disney Attractions. He left Disney in 2000 to become president/CEO of NAVTEQ, a NYSE-listed company.

Illinois-born Green, who was always keenly aware of his good fortune, often expressed his Gratitude through philanthropic endeavors (he and his wife donated more than $6 million to the Orlando Performing Arts Center) and here via eighteen of his original compositions including the six-movement Heartland Suite, written in memory of Aaron Copland who inspired him to become a composer. Green also knew his limits, and spends most of his time at the keyboard comping for woodwind specialist Daniel Jordan or bassist Ron Jenkins. Even though jazz—among other music—was dear to his heart, Green understood that his love for the genre couldn't make him another Art Tatum or Oscar Peterson. Thus he wisely leans on Jordan and Jenkins to carry the improvisational load.

Green's strong suit is composing, which he does quite well. The songs range from swing to bop, Latin to ballad, each inspired by a place, an event, an idea, a concept or a person that caused Green to put pen to paper. The Caribbean-flavored opener, "Gratitude," encompasses his philosophy of life while recalling a family vacation in Antigua. "Q" was written for jazz composer/producer Quincy Jones, "Flip Flop" for politicians who blow hot and cold on various issues. "Gentle Rain" recalls Green's college days at Indiana's DePauw University, "Manasota Key" a beach on the Gulf of Mexico. The colorful Heartland Suite, he writes, depicts "certain people, places and experiences common to the heartland of America."

Green doubles on electric piano and even organ (the swinging "Breezy") while Jordan divides his time between tenor saxophone and flute, on each of which he solos capably. Even though the jazz quotient is no better than average, Gratitude is a pleasant listening experience, thanks largely to Green's admirable compositions, expressing a love for jazz that endured to the end of his life. In a postscript, he writes that he wishes to be remembered "for [the] grit (and perseverance) that I exercised in my life; giving to others large and small gifts; and most important, gratitude [to] God for giving me this wonderful opportunity." Judson Green's was a life well-lived, and Gratitude is a luminous and tasteful coda.